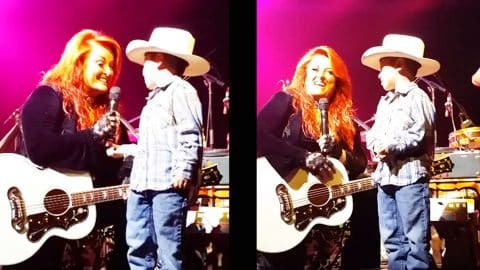 During one of her notable powerhouse concerts, Wynonna Judd and her biggest little fan took the stage by storm in a hilarious moment everyone attending enjoyed!

The “No One Else On Earth” singer welcomed Jake on stage after hearing that he was a super-fan as his delighted family cheered from the audience.

In the video, it appears that she tried to coax the little cowboy into telling the audience how excited he was to see her show that day, but he remained tight-lipped in the presence of his favorite star.

“What’s so great about today?” She asks Jake.

“LOVE Wynonna!” Someone behind the camera shouts.

The rest of the audience roars as the kid pauses in a complete starstruck moment. Her next questions elicits a response too cute to handle!

“What do you wanna be when you grow up? What do you think about?” Wynonna continued.

With that, everyone busted out laughing and the country mega star conceded, “You win!”.

Watch this hilarious moment for both Jake and Wynonna in the video below!