Vince Gill Performs Hysterical Song He Wrote In Only 20 Minutes 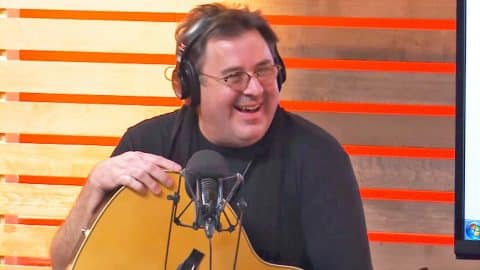 Over the years, Vince Gill has proven to be a man of many talents as a singer, musician, and songwriter. Many of Gill’s hit songs were either written or co-written by him, including “When I Call Your Name,” “Go Rest High on That Mountain,” and “Tryin’ to Get Over You.”

Gill is also known for his sense of humor, which he showcased during the 11 years he spent hosting the CMA Awards from 1992-2003. His comedic side also shows through in some of the songs he’s written and recorded, including the single “It’s Hard to Kiss the Lips at Night That Chew Your Ass Out All Day Long,” which he co-wrote with his Notorious Cherry Bombs bandmate, Rodney Crowell.

During an appearance on America’s Morning Show, Gill had the chance to combine his songwriting and comedic talents in order to create a unique, humorous song. Gill picked four words at random and was required to somehow include all four of those words into a brand-new song. The other catch? He only had 20 minutes to finish writing the tune.

The four words and phrases Gill had to include in the song were “muffin top, thunder thighs, flatulence, and cattywampus.”

Gill eagerly accepted the challenge, then performed his finished song on the show for all to hear, and the result is nothing short of hysterical.

The song is complete with a short guitar introduction, and includes lyrics such as “My sweet baby’s got a muffin top, a pair of them thunder thighs…she’ll get a little cattywampus when I’ve been gone all night.”

This is one performance you have to watch for yourself, and you won’t be able to contain your laughter once you hit “play.”

We honestly don’t know how Gill was able to keep a straight face while he sang his new, hysterical song!