A Few Days After Merle’s Death, Vince Gill Sang About Being “Lost In A World Without Haggard” 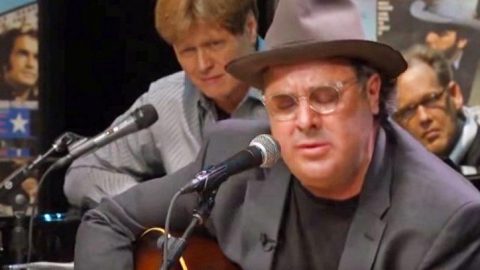 If anyone knows how to write a sad song, it’s Vince Gill. After all, he penned one of the most emotional songs in all of country music, his 1995 single “Go Rest High on that Mountain.”

Gill poured his heart into “Go Rest High,” which was written in tribute to two influential figures in his life. The first was country legend Keith Whitley, whose death prompted Gill to pick up the pen and start writing the song. But it wasn’t until his brother, Bob Gill, passed away in 1993 that Gill finished writing the song.

He also wrote a tribute in honor of another one of his greatest role models…Merle Haggard.

When Haggard passed away in 2016, Gill was devastated. Following the news of Haggard’s death, Gill shared a candid photo of the two of them, writing that Haggard was his “greatest inspiration.”

Merle wrote the truth. Between him & Willie, they are the last of the truth tellers. He was my greatest inspiration. He was IT for me.

Even in death, Haggard continued to inspire Gill. Just a few days after Haggard passed away, Gill finished writing a new tribute song to him, called “Lost in a World Without Haggard.” He debuted the song during his tour stop in Whitney Hall, Louisville, KY, and it was just as emotional as you’d expect.

But emotions were running at an all-time high when Gill dedicated to “The Hag.”

In the song, Gill sings about where he was when he first heard the news that Haggard had passed away. He then goes on to sing about how he never imagined he’d live in a world where there was no Haggard:

“He was my greatest inspiration.

The reason why I sing the blues.

I’m lost in a world without Haggard…It’s a world I thought I would never see.”

Gill couldn’t help but get a bit choked up as he sang, and we can’t blame him. Go ahead and watch Gill sing “Lost in a World Without Haggard” in the clip below. Keep the tissues close, because you’ll need them for this one.

Haggard would be awfully proud of Gill for writing such a beautiful song.