A Young Brad Paisley Pours His Heart Into Gospel Performance 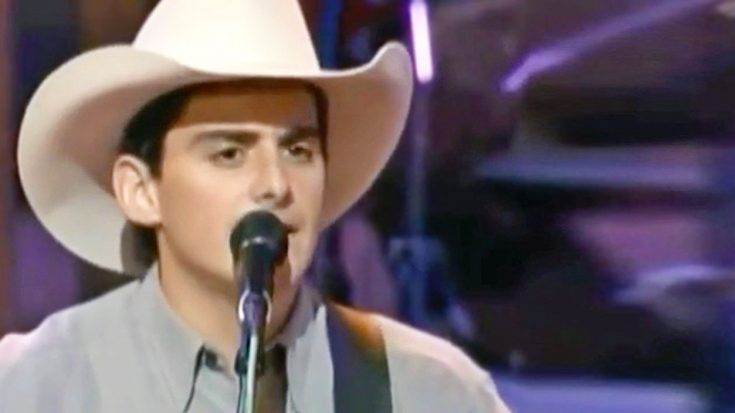 Country music may be its own genre, but it shares close connections with various others, such as bluegrass, folk, and gospel. Gospel music has a particularly strong influence, since many country artists were raised on it.

As a result of their upbringing, these country artists often make the choice to record a gospel album or two during their career. They select their favorite gospel songs and hymns to sing, and give each of them a distinctively country twist.

Although Brad Paisley has never released a gospel album of his own, he has been featured on one. That album was 2008’s How Great Thou Art: Gospel Favorites from the Grand Ole Opry, which was recorded live during a special at the Opry.

Paisley sang the beloved hymn “The Old Rugged Cross” for the special, but it wasn’t the only time he performed a gospel song at the Opry. Years and years ago, Paisley wowed the entire Opry crowd when he delivered a soaring performance of the popular song “In the Garden.”

Introducing the song as one of his “old favorites,” Paisley was joined on stage by the talented steel guitar player Mike Johnson. He invited the crowd to sing along if they’d like, and then proceeded to flow right into “In the Garden.”

Paisley’s heartfelt delivery of the song instantly drew in everyone that was watching. His performance had no need for flair, since simplicity was perfectly appropriate for the song he was singing.

Toward the end of the performance, Paisley was joined by singer-songwriter Steve Wariner, who beautifully harmonized with him on the last few lines. Once they finished, the crowd responded by awarding them with a warm round of applause. It was well-deserved, that’s for certain.

Go ahead and take a trip back in time to watch a young Paisley charm the Opry with this treasured gospel song.