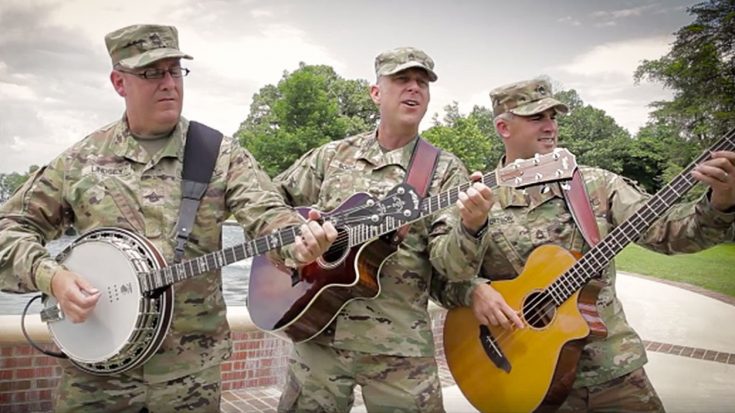 Fan favorite Army band Six-String Soldiers gave their viewers a reason to dance when they celebrated their return home with a lively performance of the gospel hit “Uncloudy Day”. The band kicked off their video by showcasing killer instrumentals as they stated, “We’ve been out touring for the last couple months, but we’re glad to be home and thought we’d come out on the first day of summer and do a video for you guys.” With that, the soldiers broke into a harmonious performance that washed the clouds from the sky and put happiness in our hearts!

“Oh, the land of cloudless day/ Oh, the land of an unclouded sky/ Oh, they tell me of a home where no storm clouds rise/ Oh, they tell me of an unclouded day,” they sang. The men alternated from solos to harmonies, creating a diverse array of vocals and sounds. Fans were quick to ask where the band’s mandolin player was amidst the filming, prompting the men to reveal that, after 27 years of service, he was on his way to retirement.

The upbeat performance put a smile on the faces of viewers grateful for the soldiers’ happy-go-lucky spirits and gift of music. The covered hit has been a smashing success for artists that take on the challenge, ranging from country outlaw Willie Nelson to Bob Dylan. However, the tune was originally drafted in 1879 by Josiah Kelley Alwood.

Be sure to check out the vibrant performance below.