Adam Levine Loses It & Walks Off Stage During ‘Voice’ Auditions 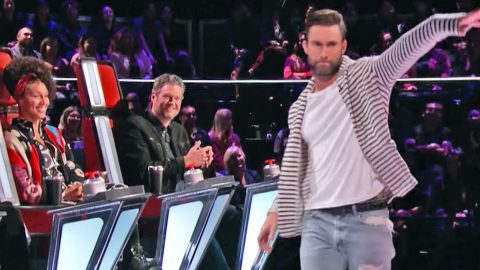 After hearing what he knew was a perfect fit, the longtime ‘Voice’ coach trudged off stage exclaiming, “I just need to be left alone right now!”

During the brand new episode of blind auditions on Thursday’s airing of The Voice, a young singer named Casi Joy earned herself a four-chair turn after a jaw-dropping performance of LeAnn Rimes’ breakout hit, “Blue.”

It was easy for Adam Levine to see why he would be out of the running for this immensely talented artist – especially since Blake Shelton was the last of the four coaches to push his button and turn.

“I would do cartwheels to have you on my team,” Levine confessed. “But I have been beaten down so many times by hearing a voice like yours, which clearly is rooted in that traditional country thing, so I’m not going to get my hopes up, because I am too exhausted.”

With that he promptly got up from his seat and meandered off stage to go sit on one of the stair cases leading up through the studio audience. There, he pouted as the other coaches tried to win over Joy, each pleading their case.

Whaaaa? I am so blown away by everyone's support! Last night was incredible. Thank you, from the bottom of my heart, to my town of @smithville.school for coming out to support me last night! And thank you to everyone who has been retweeting and sharing! #TeamBlake #TheVoice #TeamCasiJoy #VoiceBlinds

When Joy admitted she wasn’t just a country singer and has sung all genres of music, Levine’s mood perked right up and he headed back to his chair.

“I’d like to retract some of my previous statements,” Levine stated. “They were the rantings of a mad man. I’ve changed, Casi. I’m a new man! What if you chose me? That’s crazy! That’s the worst decision ever! Or, is it the best decision ever? You decide.”

Each judge had made a great plea to try and sway her decision, with Alicia Keys even suggesting she pick Gwen Stefani, implying that she’d get both Stefani’s influence and Shelton’s since they’re an item.

Omg I am in utter shock. Thank you so much @blakeshelton for believing in me and all my weirdness. This is such an absolute dream come true. I hope you liked my version of #MyChurch by the trailblazing @marenmorris 😍Be sure to download it on iTunes and help me chart!!! #VoiceKnockouts #teamblake #teamcasijoy #marenmorris #countrymusic

Through all that, Casi Joy chose Shelton as her mentor. After her decision, Levine tweeted out his sentiments on the choice, “Well, I can’t say we didn’t see that coming….”

Watch this incredible audition and Adam Levine’s hilarious antics in the video below.

Her voice amazed the coaches on The Voice! Listen to Casi Joy sing "Blue."