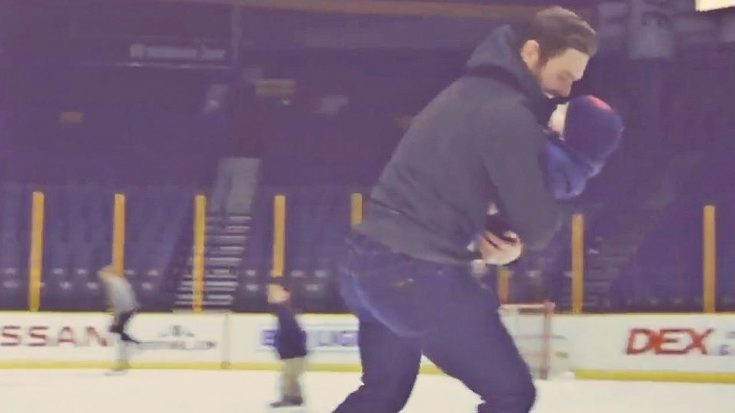 As most of you know, Carrie Underwood’s husband, Mike Fisher, is a huge NHL hockey star and plays for the Nashville Predators. Formally of the Ottawa Senators, Fisher was traded some years ago to be closer to his wife, whose career centers around Music City.

He recently wrote an article in The Players’ Tribune about his trade from Ottawa to Nashville 11 years into his hockey career.

After his manager had told him about the trade, Fisher received a phone call from the owner of the franchise.

“I knew I was incredibly blessed to be going to Nashville,” Fisher writes about being traded. “When I was packing up my stuff to go to the airport, I got a call from Eugene Melnyk, the owner of the Senators. He thanked me for my time in Ottawa, and then he said something I will never, never forget.

He said,’You know Fish, I just wanted you to be with your wife.’

When trade talks had heated up, a few teams had been interested in me, but Eugene and Bryan [Murray, GM] agreed to make sure that my destination would be Nashville. They could have traded me anywhere, but they were genuinely looking out for me and my family. That’s what makes hockey such a special sport, even at the NHL level. Yes, it’s a business, but the amount of good human beings I’ve run across in this sport is just incredible.”

Underwood tweeted the article out and expressed the emotion she was feeling, “This is amazing. Made me cry…“

Shortly after Fisher arrived in Nashville, he took Underwood for a skate and it was the cutest thing we’d ever seen.

Now they are parents to an almost two-year-old son, Isaiah. With Underwood in Australia wrapping up a tour with Keith Urban, Fisher took him to work. And by work, we mean the ice rink!

In a video posted on Twitter, Isaiah is adorably sitting in a white bucket and Fisher pushes him on the ice. Isaiah also takes Fisher’s hat off and throws it on the ice. Fisher then scoops him up for the cutest father-son moment we have ever seen in the history of the world. Both of them have the biggest smiles on their faces, and it’s so adorable!!

Watch the super cute video below.

ask me if I'm okay because I'm definitely not. pic.twitter.com/S4auqtJba6