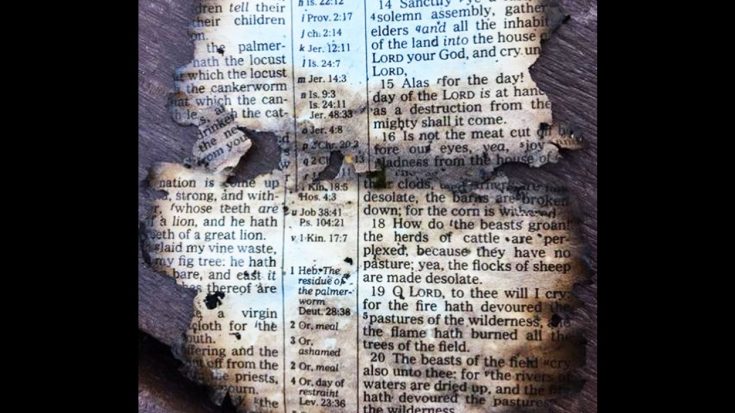 Just the day after the massive wildfire burned down part of Dollywood’s beloved Smoky Mountain Cabins, a worker for the park discovered something that left him and others in tears.

The Gatlinburg Fires have swept throughout Eastern Tennessee and destroyed more than 150 structures, killed at least three people, and left thousands more homeless. Even Dolly Parton‘s famed theme part, Dollywood, was threatened by the fast-moving flames.

Parton herself released a statement expressing her deep sadness and heartbreak for the seemingly endless destruction caused by the horrific fires.

While just a few outlying cabins from Dollywood were damaged in the fires, it was with great luck that the park itself was spared – a sentiment Parton echoed heavily. The park, however, still needed much cleaning from debris leftover from the fires.

It was during a day of cleaning for park employees that, Isaac McCord discovered a charred piece of a Bible passage that left him in tears!

According to a report by USA Today, McCord was double-checking an area already cleaned by park employees and spotted a piece of paper lying in a puddle. His curiosity got the best of him and he looked down to see what it read.

“As soon as I got down on the ground, I noticed it was a Bible verse, and I was like holy crap,” McCord revealed in a phone interview. “It was in a puddle of water. I said, ‘I want to take care of this the best way I can,’ so I gently scooped it up and carried it out the best I could.”

Calling over another employee working with him, they sat down and began reading the excerpts left untouched by the fire – and to their amazement it appeared to discuss the horrific disaster that had recently swept through their beloved state.

The passage, likely from the first chapter of Joel in the King James version of the Bible, left a chilling mark on the pair of workers.

“O Lord, to thee will I cry: For the fire hath devoured the pastures of the wilderness, and the flame hath burned all the trees of the field”

“We were like this is unreal, this is unbelievable,” McCord said. “When we had both fully read it, we looked at each other — and I will never forget this moment — we both burst into tears. I was ghost white, and we just prayed. There was nothing else to do.. Still to this moment, almost four hours after the fact, I don’t have words for it.”

McCord uploaded a photo of the charred passage to his Facebook page and filled in the illegible parts of the passage left by the fire.

See Isaac McCord’s full post below and watch the video of the fires throughout Gatlinburg from the local news station as well.