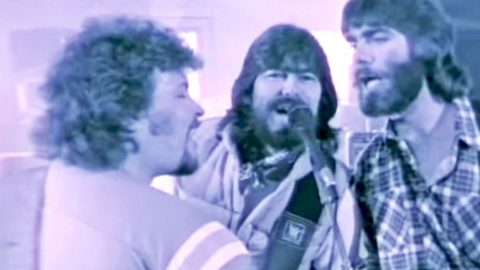 One Of Country’s Leading Groups

Out of all country music groups, none have ever been able to match the success experienced by Alabama.

With more number one hits, awards, and honors than anyone could begin to count, Alabama is the country group that all others aspire to be like.

The group profited the most during the 1980s, when they had seven multi-Platinum albums and 27 chart-topping hits. One of those songs was “The Closer You Get,” which marked a major milestone for the group when it reached the top of the country chart.

A Country Love Song For The Ages

Told from the point of view of a man speaking to the woman he admires, the song is all about how it feels to fall in love. As the man explains, the closer the woman gets to him the further he falls in love with her.

The narrator describes how his feelings are now out of his control, as he sings, “The closer you get, the further I fall. I’ll be over the edge now in no time at all.”

Few people know this, but “The Closer You Get” was not originally recorded by Alabama. The song was written by J.P. Pennington and Mark Gray of the country/rock band Exile, and they were the first to release it. However, their recording didn’t generate much attention.

“The Closer You Get” was then picked up by country singer Don King, who had a better streak of luck than Exile did. His version of the song was released in 1981 and reached the 27th spot on the Billboard Hot Country Singles chart. Pop singer Rita Coolidge also released a recording of the song that same year.

Bringing The Song To Life

But it was Alabama that carried “The Closer You Get” to the coveted top spot on the country chart. In doing so, the group reached a personal milestone, as the song became their tenth number one hit of all time.

Alabama filmed a music video for the song, which was released to air on CMT and GAC.

The group took a simplistic approach for the video, which shows them performing in a dimly-lit room. As evidence that simplicity is sometimes key, the music video went on to become one of Alabama’s most recognizable.

Now it’s time to throw it back to the iconic “The Closer You Get” by checking out that music video below. This is one song that will never get old!