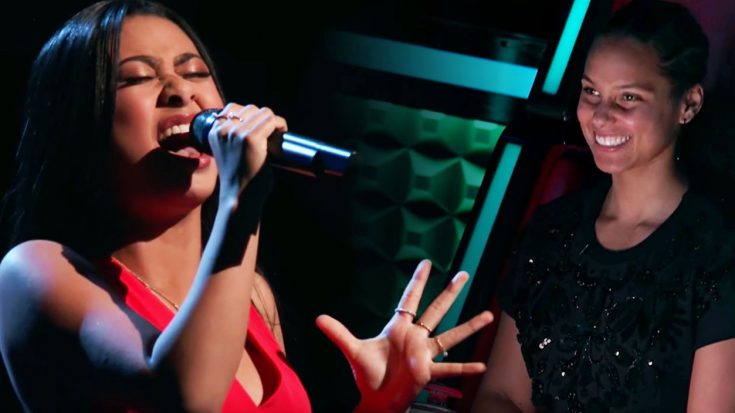 Taking the stage during a ‘knockout’ round she definitely intimidated her competition with this rousing cover of a country superstar’s chart-topping masterpiece.

During this recent ‘Voice’ episode, contestants on each team took turns competing for a spot to stay on their respective teams in a series of rounds that pinned them against one another, singing a full song on their own.

When Alicia Keys‘ team lined up to perform, there was one particular standout that blew everyone away with an unexpected song choice.

Often, most of the country songs and artists tend to stay over on the side of Blake Shelton and his team, but in this recent knockout performance Keys’ team member, Anatalia Villaranda, picked up one of country megastar, Carrie Underwood‘s powerhouse hits.

Singing “Two Black Cadillacs” all alone on the stage, most of the judges had no idea what to expect from young Villaranda, but just a few short notes into the song and everyone’s jaw dropped at the incredible performer standing in front of them.

At the end of her performance, there was no question who was the winner of this knockout round and it was an easy choice for Keys’ to make.

Watch Alicia Keys look on excitedly as her sparkling protégé delivers this heart-stopping cover of a country hit!