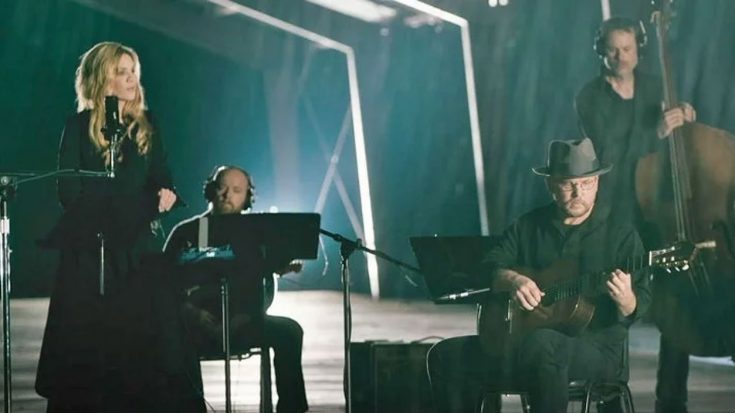 Anyone who has listened to Alison Krauss sing can understand why she’s received more Grammy Awards than any other female artist in history. With a total of 27 Grammys and many other awards to her name, Krauss is one of the most highly decorated singers in the world.

Krauss has perhaps become best known for her work with her band, Union Station. As a group, Krauss and Union Station have recorded a total of six albums. Krauss has also recorded a few solo albums over the years, with the most recent being Windy City.

Windy City is Krauss’ first solo record in 18 years, since the release of Forget About It in 1999. The album includes a collection of cover songs, which are all classic country staples.

“On this album, I wanted to sing songs that are older than I am,” Krauss said during an interview with Rolling Stone Country. “There’s a real romance in singing other people’s stories.”

But “River in the Rain,” is one song on Krauss’ new album that is actually younger than her. The song was written by country legend Roger Miller for his musical Big River, which debuted in 1985. The show was based on Mark Twain’s Adventures of Huckleberry Finn and ran over 1,000 performances.

Krauss’ angelic voice pairs perfectly with the beautiful song. Because of this, “River in the Rain” quickly stood out as one of the brightest gems on Windy City.

Now Krauss has an equally mesmerizing video to go along with her recording of the song. Released on May 11, the video shows Krauss singing along with a string band underneath a large shelter house structure.

Dressed in black, Krauss and her band nearly blend into the night sky behind them. A few lights shine down on the group, creating a heavenly glow.

Although the camera often moves out to focus on the entire group, you’ll never want to take your eyes off of Krauss. Her performance is just that captivating.

Toward the end of the video, a hard rain starts pouring down from above. The element adds further to the already surreal nature of the performance and helps bring it to a stunning conclusion.

You can enjoy Krauss’ video for her rendition of “River in the Rain” below. Everything about it is guaranteed to take your breath away.