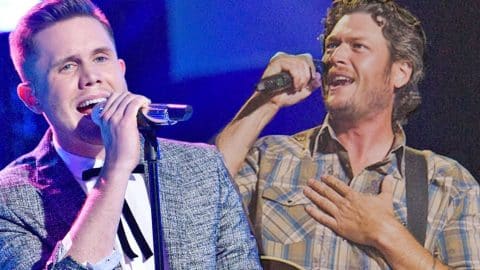 Winner of the most recent and final season of American Idol, Trent Harmon, posted a video of him singing Blake Shelton’s “I’m Sorry” but with a new soulful makeover.

The Idol star is currently on tour with his band and recently added the song to his set list. The Mississippi native took to Facebook for live performance of the song for his fans that cannot make it out to the show.

“We got a couple new songs in the set list and for the ones of y’all who can’t make it,” tells Harmon. “We got some more other than this one but we thought we’d do this one for y’all.”

Harmon sits idly in front of his computer for the song after he introduces the rest of the band. The singer performs an incredibly soulful acoustic version of the song that will surely delight his fans.

“I’m Sorry” was released off Shelton’s Red River Blue album in 2011 and featured Martina McBride. The album went platinum and peaked at No.1 on Billboard’s Top Country Albums.

You can watch Harmon’s live performance of the song in the video below!