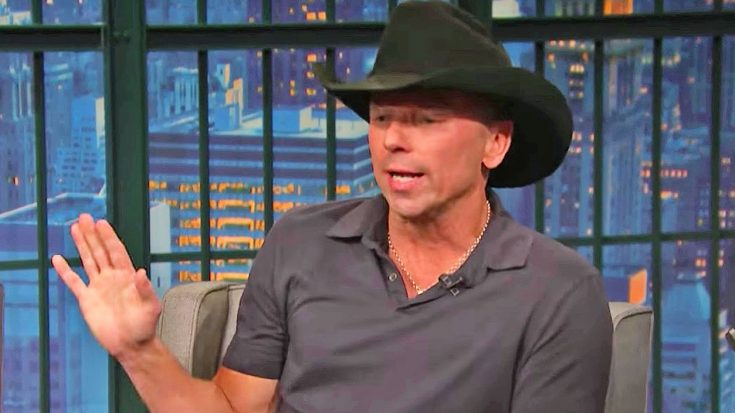 Today, Kenny Chesney is regarded as one of the most eligible bachelors in country music. With over 40 Top Ten singles, a fit physique, and a passion for helping others, what’s not to love?

Although Chesney has plenty of female fans fawning all over him now, he hasn’t always had success with the ladies. This is something that he admitted during a recent appearance on Late Night with Seth Meyers.

The two opened their interaction by discussing Chesney’s Grammy-nominated album, Cosmic Hallelujah. This nomination is especially notable, since it marks the first time Chesney has even been nominated for something that is not a collaboration.

As they were talking about the album, Chesney brought up the music video for his song “Rich and Miserable,” which was set at a university. That made Meyers remember that he heard Chesney wrote his first song in college, and he wanted to know if that was true.

Chesney said it was, and then began to explain how that song came to be. It turns out, Chesney wrote his first-ever song with the hopes of impressing one of his classmates:

“There was a girl next to me that I was trying to persuade to go out with me, and I thought I would write her a song,” he said. There was a hint of embarrassment on his face as he continued. “I stayed up at my apartment off campus and I tried to write this girl a song. I put it on a cassette tape…and I took it to class the next day.”

But when Chesney got to class, he didn’t have the nerve to talk to the girl. So instead of telling her that the tape was for her, he just slid it over to her without saying a thing.

They left class and Chesney went home, likely anxious to know what the girl thought of his song. He got his answer the next day when he walked in and saw that the girl was no longer sitting at his table.

In other words, Chesney had been brutally rejected by the girl he liked. Ouch!

But he took it all in good stride. Looking back on that interaction, Chesney considers it to be his first taste of rejection in the music business.

Now look at him! He’s a Grammy-nominated country superstar with nowhere to go but up!

You can catch the entirety of Chesney’s interview with Meyers in the clip below. What do y’all think of his rejection story? We feel bad for him, but it’s also kind of funny!