Beagle Named Buddy Howls Whenever He Plays The Piano 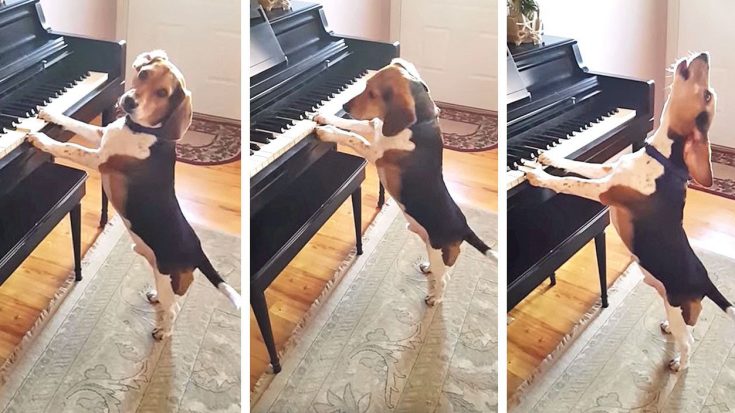 Ladies and gentlemen, allow us to introduce you to the next big music star…Buddy the Beagle!

Buddy’s owners rescued him and welcomed him into their loving home, where they happen to have a piano. One day, Buddy strolled over to the piano and started playing away. Imagine how surprised his owners were when they saw him doing that!

But Buddy doesn’t only know how to play the piano. It turns out this goofy pup has some singing skills too.

As hound dogs, Beagles are well-known for their loud howl. While this is usually an annoyance, such is not the case where Buddy is concerned. In fact, his howling has made him an internet sensation!

Buddy’s owners decided to film one of his little performances and ended up sharing it with the world. They posted the video in February 2017, and it has generated over two million views so far.

It’s no wonder why the clip has been viewed so many times, because it’s as cute as cute can be. The video shows Buddy standing on his hind legs next to the piano, his front paws positioned perfectly on the keys. At his owner’s instruction, Buddy begins playing and singing his heart out.

Buddy hits a note or two on the piano, then proceeds to howl away for a few seconds before playing a few more notes. This pattern keeps going throughout the whole clip, though his howls grow longer and louder as he goes on.

His tail wagging the entire time, Buddy seemed to be having the time of his life. He came to his owner once he finished singing, and was praised for a job well done.

Go ahead and tune in below to watch the video of Buddy’s adorable piano ballad. It’s sure to put a smile on your face!