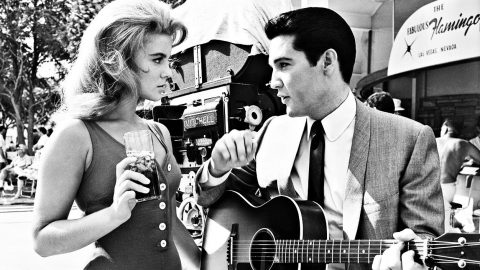 This behind-the-scenes footage that surfaced after nearly 40 years shows both The King and his talented co-star, Ann-Margret, on set at The Flamingo Hotel for their unforgettable motion picture.

Elvis Presley and Ann-Margret starred in the 1964 musical blockbuster Viva Las Vegas and set the world on fire with their intense on-screen chemistry and stunning duets. It was this film that would forever be marked in history as highlights of both stars’ careers.

It’s unknown who or why this behind-the-scenes footage was taken, and back in the 60s, folks didn’t have the luxury of cameras on devices they carried around – so someone must’ve gone out of their way to capture this.

Throughout the footage, you can see both Elvis and Ann-Margret wandering around the pool and set at The Flamingo getting ready to take their positions while the extras, and presumably, hotel guests, meandered around excited to be a part of the film.

At one point, you can see Ann-Margret help a group of swimming children hop out of the pool while dressed in her iconic red bathing suit costume.

Watch this rare, behind-the-scenes look at Viva Las Vegas with Elvis and Ann-Margret below.