Behind The Secret Win NASCAR Refuses To Acknowledge 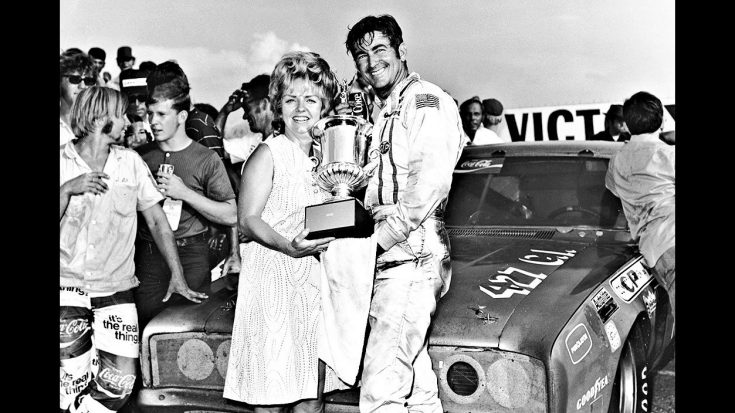 Known as the only NASCAR race to never have a winner, this unforgettable moment in the history of the sport still continues to be a point of conversation today.

More than 46 years ago, a legendary driver stole the show with an outright win during the very first combined race of NASCAR’s Grand American lineup…but even today, many believe his win was unjust.

In the current climate of NASCAR, if a winner is found to have improper or illegal parts on their car during a post-race inspection, the win is deemed “encumbered” and not counted in various ways. Back in the early 1970s, the rules were a bit different – and that’s how we ended up with a race that didn’t have a winner.

The Grand American races were pitched as events for pony cars – generally Camaros, Cougars, Firebirds, Mustangs, or Javelins. Usually, these cars did standalone events that weren’t part of the Cup Series, but during the 1971 combined race at Bowman-Grey Stadium, they were invited to compete and fill the Cup Series’ grid.

Bobby Allison, driving his ’69 Mustang, took home top honors that day ahead of Richard Petty’s Plymouth and others’ mixed lot of pony cars.

Petty, upset at the allowance of non-standard cars in the competition, voiced his concerns, “I figured something like this would happen. They’ll probably win all these (combination) races. (Cup) racing isn’t supposed to be filled with Mustangs and Camaros.”

Allison was never awarded the victory in the record books, and NASCAR continues to deny that it was an eligible race – even the head of the NASCAR Hall of Fame says that it’s the only race to never have an official winner.

The biggest talking point is the debate over whether or not NASCAR officials told the drivers that they would not get credit for a Cup Series victory if they won. Unfortunately, the officials at the time have all passed away and never issued a formal statement on the matter. Several other drivers have come forth and stated that they do not recall such a wild rule being placed on the event.

To this day, NASCAR only credits Allison with 84 victories, negating this August, 6th, 1971 race in Winston-Salem.

“But I really hope that someday somebody will say, ‘Whoa, wait a minute; this is a true mistake,’” Allison told AutoWeek. “Somebody will say, ‘How can we have a race without an official winner?’ I got the money and the trophy, and I’ve been told the race was in the record book for a year or two, then it wasn’t. If NASCAR is a major sport, then Bowman Gray was a major race. And how can you have a major race without a winner?”

Longstanding NASCAR historian, Buz McKim even has no explanation for the lack of a winner for that race, saying, “This may be one that will never be settled. … It’s still the only NASCAR race without an official winner.”