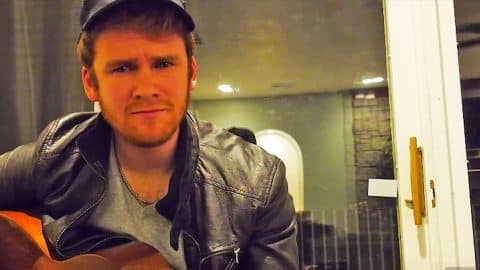 As the son of one of country music’s finest legends, Ben Haggard has had greatness pumping through his veins from the very beginning. His father, Merle Haggard, was an iconic trailblazer in the world of country music, earning countless awards and leaving his permanent handprint on the industry.

Ben not only inherited an incredible guitar talent, but he also has an incredible voice that bears a striking resemblance to his later father’s. Making his father exceptionally proud, this son of music royalty has continued to carry his father’s musical legacy through various performances and a promising record deal!

Taking to his YouTube page, Ben recorded and uploaded a recent performance of a song that his father personally penned for the great Johnny Cash, although the creation was never released. Titled “Color Me,” the heartbreaking ballad is filled with pleas and devastating heartbreak, an emotion that is channeled through Ben’s eyes as he passionately performs the song.

As if his chilling vocals aren’t sufficient enough, Ben effortlessly strums a guitar to complement his talent and showcase his inherited gift. Listen to Ben’s performance below and tell us what you think.