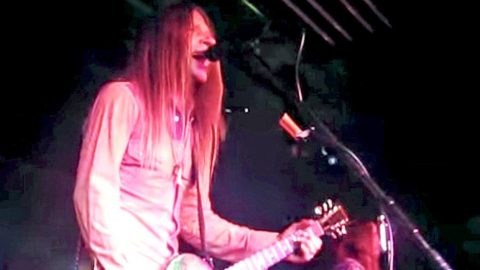 There’s something about Lynyrd Skynyrd‘s “Tuesday’s Gone” that continues to speak to people. The proof can be found at any of the band’s concerts, where thousands can be seen with tears in their eyes as they listen to the reflective tune.

Music artists have also been able to emotionally connect to “Tuesday’s Gone,” which is why it is one of the most frequently-covered songs in their entire catalog. Everyone from Metallica to bluegrass group The Stevens Sisters have offered their own take on the tune.

While Blackberry Smoke has been able to headline their fair share of shows, they started out opening for some of the biggest names in music. Among the artists they have served as a supporting act for include Zac Brown Band, ZZ Top, and of course, Skynyrd.

That’s why Blackberry Smoke was able to do what they did when they took to the stage for a show in Augusta, Georgia in 2011. While there, the group paid homage to those who came before them in Skynyrd by delivering one impressive version of “Tuesday’s Gone.

Blackberry Smoke made sure to honor the song’s original style, not daring to deviate too far from it. Filling their performance with soul, they managed to captivate the entire crowd from the second they started.

Now it’s time for you to witness this remarkable tribute to one of Skynyrd’s finest songs. Tune in below to check it out.

Way to go Blackberry Smoke! The Skynyrd guys must be proud!