By Jennifer Pernicano on September 30, 2014
Advertisement 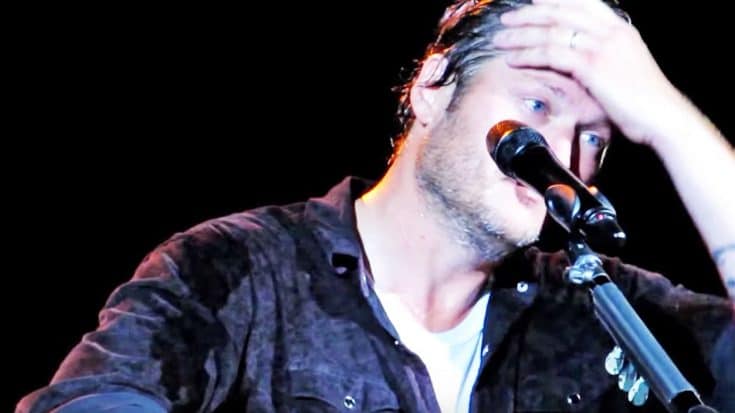 Typically known for exuding a tough exterior, Blake Shelton broke down on stage at a concert in September 2013. He told the audience he wanted to play “the two most important songs” in his life. He introduced the first song by saying, “This first song that I wanna play ya, I didn’t even record this, my wife did,” referring to his then-wife Miranda Lambert.

“Miranda and I wrote this together one night on my bus…we decided that she should record because I wasn’t sure if I could get through it every night…I think it’s been enough time now. Let’s try this thing,” he said.

Shelton and Lambert co-wrote the ballad together about a traumatizing event from his childhood. When Shelton was a teenager his older brother lost his life in a car accident. He passed the song along to Lambert because of his emotional connection to the song that prevented him from being able to perform it himself.

“Over You” was released in 2011 debuting at number 52 before eventually hitting number one on the Billboard’s Hot Country Songs as well as the all genre Hot 100.

In November 2012, Shelton and Lambert won the CMA for Song of the Year and the “Ol’ Red” singer gave an emotional speech:

“I lost my brother in a car wreck when I was 14 years old and later in life, when I decided I wanted to be a country singer, my dad always told me, ‘Son, you should write a song about your brother.’ I lost my dad in January and it’s so amazing to me that tonight, even after he’s gone, he’s still right.”

Blake's acceptance speech for CMA Song of the Year in 2012 pic.twitter.com/l4I9LteFgh

Shelton only sings this song on special occasions. Most recently, he performed it at the Troy Gentry Foundation concert at the Grand Ole Opry in January 2019.

You can watch his emotional first performance of “Over You” in the video below.