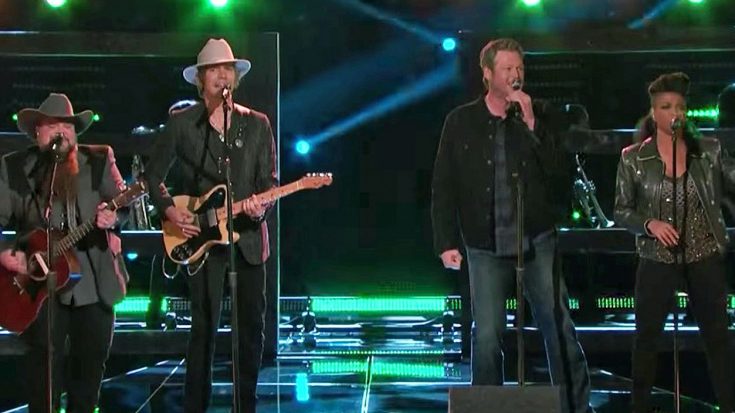 After winning four seasons of The Voice, you could say that Blake Shelton has a pretty good ear for talent. He’s proven time and time again that he knows how to form a strong team that can go all the way to the finale.

When it comes to the current season of the show, Shelton once again has a powerful set of voices on his team. With the talents of Sundance Head, Austin Allsup, and Courtney Harrell on his side, Shelton has himself prepped for victory.

On Tuesday night (November 22), America found out which contestants would earn a coveted spot in the Top 10. Fortunately for Shelton, all three of his team members made it through, so they have the chance to sing another day!

Before the final results came in, Shelton joined his team on stage for what ended up being an epic group performance. The quartet performed the 1984 hit “The Heart of Rock & Roll,” which was recorded by Huey Lewis and the News.

Shelton opened the group’s performance, crooning into the microphone with his signature country twang. Then Head took over with a short solo before the entire team joined forces on the chorus.

Toward the end of the song, Shelton and Harrell sang together in a mini-duet. Shelton’s pure country voice and Harrell’s soulful vibe combined in order to create a unique sound that the audience loved.

We’re sure that you’ll get a kick out of this performance as well. Tune in below to check it out!

What do you think of Shelton’s team? Is he the coach of the season’s winner?