Blake Shelton Holds Nothing Back In Untamed Performance Of ‘Ol’ Red’ 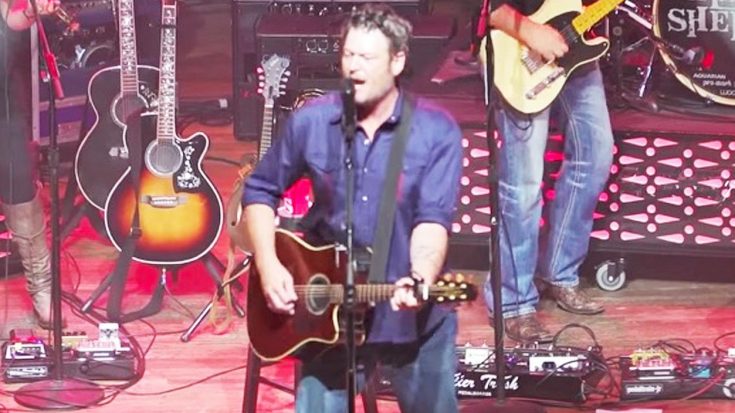 Those who piled into Nashville to attend the CMA Music Festival in June were in for a big surprise. Prior to his performance at Nissan Stadium, Blake Shelton revealed his plans to play a previously unannounced show at the Wildhorse Saloon in downtown Nashville.

The show took place two hours after Shelton’s announcement, and according to The Tennessean the venue was packed “shoulder-to-shoulder.“ Shelton performed a 90-minute set that featured a strong blend of newer material and some of his earliest hits.

One old song that Shelton knew he had to bring back was “Ol’ Red.” Since Shelton’s version of the song is so recognizable, few realize that he wasn’t the first artist to sing it. The song was originally recorded by George Jones for his 1990 album You Oughta Be Here with Me, but he never released it as a single.

Kenny Rogers was actually the first artist to send “Ol’ Red” out to radio when he released it as a single off of his 1993 album If Only My Heart Had a Voice. His version failed to chart, making it seem as though “Ol’ Red” wasn’t radio material.

But Shelton changed all that when he recorded and released his version of the song in 2002. His recording topped the Billboard Bubbling Under Hot 100 Singles chart and reached the 14th spot on the Hot Country Songs chart. Although it never hit the top spot on the country chart, “Ol’ Red” has earned the distinction as one of Shelton’s signature hits.

After 15 years, Shelton still sings “Ol’ Red” with the same sense of ferocity that made fans go wild for it at first. A video Shelton shared on his YouTube channel shows him singing the song at the Wildhorse Saloon during CMA Fest, and it was one aggressive performance. He poured an abundance of energy into the whole thing, making sure his fans enjoyed every second of the song.

We’re sure you’ll also enjoy Shelton’s untamed performance of “Ol’ Red” once you check it out in the video below. He knows how to put on a good show, that’s for sure!