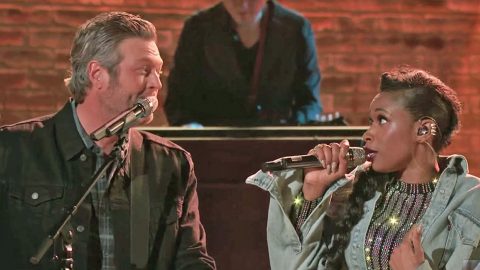 Every now and then, the coaches from The Voice will team up in order to deliver a one-of-a-kind collaboration. Sometimes all four coaches sing together, while other times two coaches will pair up to perform a duet.

Since the coaches come from various backgrounds and genres, these collaborations are quite interesting to witness. As different as their styles may be, they often end up working well with each other, much to everyone’s delight.

On Tuesday night (November 28), Voice viewers were treated to such a performance. The two coaches responsible for delivering the duet were Blake Shelton and Jennifer Hudson, who seem like unlikely collaborators.

The two went full-on country for their duet, opting to sing Shelton’s current single, “I’ll Name the Dogs.” Released in September, the romantic tune has left its mark on the country charts in the U.S., and already topped the chart in Canada.

Shelton opened the performance on his own, and Hudson came out to join him a little while later. She sang backup on the chorus while Shelton maintained the lead throughout the song.

Hudson’s voice blended perfectly with Shelton’s on the parts she sang with him. The two also shared good onstage chemistry, and seemed to be having a fun time singing together. They often looked directly into each other’s eyes while they sang and also danced around, which added a cutesy element to their performance.

This is one duet we never knew we needed, but we’re so glad it happened! Check it out in the video below, then let us know what you think of it!