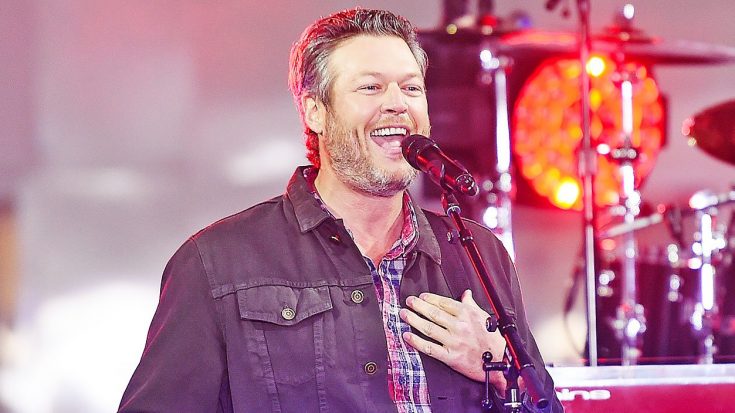 With the release of his new album Texoma Shore fast-approaching, Blake Shelton has slowly started to reveal some of its tracks. “I’ll Name the Dogs” was released as the album’s first single in September 2017, and has climbed as high as the tenth spot on the Hot Country Songs chart.

After “I’ll Name the Dogs,” Shelton sampled another part of Texoma Shore by releasing the track “At the House.” Now, we have yet another new song from the album to enjoy…its 11th and final track “I Lived It.”

Written by Ashley Gorley, Ben Hayslip, Rhett Akins and Ross Copperman, “I Lived It” is as nostalgic as it gets. In the song, Shelton reflects on various childhood memories, such as when his uncle used tobacco juice to help treat his yellow jacket stings, or when his grandmother got upset over the length of his sister’s Sunday dress.

While Shelton didn’t write about these memories, they are distinctly country. Anyone who had a similar sort of upbringing can probably relate to some, if not most of the things that Shelton mentions in the song.

A little later on, Shelton even pokes a little fun at himself and the “Hollywood” persona he has been accused of developing since he started working on The Voice. Buried in the middle of the song, Shelton slips in a subtle line that looks back on simpler times when “Hollywood was fake and wrestling was real.”

In years since the ones Shelton sings about in “I Lived It,” Hollywood has shifted more toward the “real” side of the spectrum. Reality shows such as The Voice now rock the ratings and dominate major channels.

Again, while Shelton didn’t write the line, it means something coming from him. Listening to him sing it, you can almost feel as though he personally is longing for the time when he wasn’t the celebrity he is today.

The rest of the song is equally reflective, especially the chorus. Through those particular lyrics, Shelton speaks to people who may think he’s “crazy” for having experienced the things he describes. But he’s perfectly alright with that, as he sings, “That’s just the kind of life that made me who I am.“

You can listen to “I Lived It” in its entirety by clicking on the audio clip below. Let us know what you think of it when you’re done!