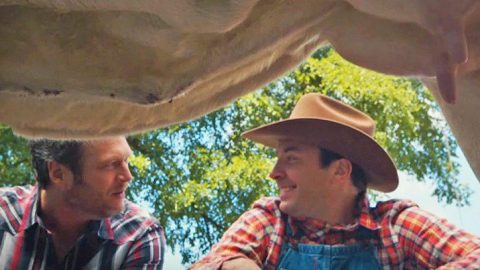 Over the years, Blake Shelton and Jimmy Fallon have become quite the comedic pair. Prior to this instance, Fallon made Shelton try sushi for the first time.

The hilarious segment aired on The Tonight Show and featured the two celebrities eating raw fish, which didn’t go over too well with Shelton. His reactions were more hilarious than the last as more and more sushi rolls were delivered to their table. He did like a few of the sushi rolls he tried, but said that “the texture is like Play-Doh.”

Shelton’s favorite part of the meal was the sake, or rice wine. Every few minutes he would ask for more, which was hilarious in itself.

Since Fallon is a gentleman, he allowed Shelton to get some revenge, so he did something he’s never done before that Shelton is an expert at: milk a cow. Dressed in a plaid shirt, overalls, and cowboy hat, Fallon looked ready to go, but Shelton called his ensemble “disrespectful” and told him he looked like “Howdy Doody!”

“You think this is a joke right now? This is serious,” Shelton said, with a chuckle.

He gave Fallon pointers on how to approach the cow, who was adorably named Oreo. Shelton explained to him that milking a cow is all about romance and finesse, and that he needed to be gentle when he grabs a “teet.”

The bit got funnier and funnier as time went on, with Fallon trying to milk the cow directly into his bowl of cereal and Shelton pulling a prank on him in the end.

Will Fallon ever milk Oreo the cow? Find out by watching the video below!