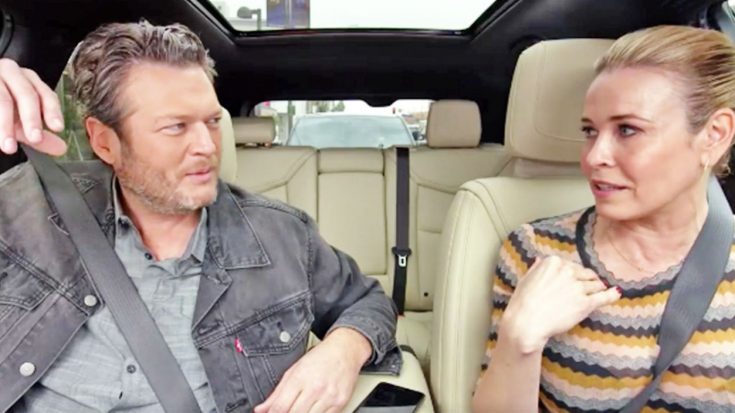 Late Late Show host James Corden took the world by storm with his show’s segment “Carpool Karaoke,” with the videos incurring hundreds of millions of views on YouTube since its debut featuring the late George Michael. Quickly catching attention from the media, streaming service Apple Music decided to make a complete series surrounding the segment.

Amongst the dozens of stars to appear on the new series, that of Blake Shelton and comedian Chelsea Handler will definitely go down in history as the funniest episode to ever hit the series.

Seeing as the two are relatively unlikely friends – he’s a country superstar and she’s and internationally known comedian – Shelton decided to try and bridge the gap between the two of them and teach her a thing or two about songwriting.

“Do you feel like your life could be written into a great country song,” Shelton asked Handler.

The country singer went on to explain to Handler that in order for her life’s anthem to be a true country song, there has to be a love interest, to which the comedian responds that while she’d love to have a “love interest,” no one is interested.

After mulling over all that he had to work with, Shelton crafted up the foundation for what Handler’s love story would be written on.

“Basically, it’s about a lonely, miserable white Jewish girl who’s gonna have to wait for somebody to get divorced,” said Shelton to a laughing Handler.

After crafting up Handler’s life song, the country singer proceeded to attempt to teach her how to sing using his extensive experience as a coach on The Voice to the tune of “Take On Me.”

﻿You can watch the hilarious video below.

“Basically, it’s about a lonely, miserable white Jewish girl who’s gonna have to wait for somebody to get divorced.” Looks like Blake Shelton and Chelsea Handler just wrote the next big country song!