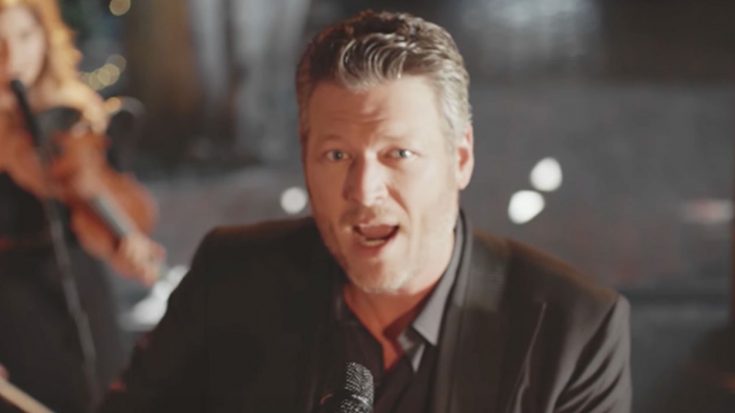 Blake Shelton took the country music by storm when he released his album Texoma Shore in November 2017.

Our Album Of The Week is "Texoma Shore" by @blakeshelton Listen out for tracks throughout this week on https://t.co/g3dHh8ObDq pic.twitter.com/tD8084WkYl

Fans got a glimpse of the album when he released the first single, titled “I’ll Name The Dogs,” on September 11, 2017. With a song already in his catalog like “Ol’ Red,” we really didn’t know what to expect out of “I’ll Name The Dogs,” so we were pleasantly surprised when it turned out to be a love song.

In the music video, Shelton plays a wedding singer, performing the upbeat song for dancing guests at the reception. If you look closely, his girlfriend Gwen Stefani’s sons Kingston and Zuma, and her niece Stella, appear in the dancing scenes.

Other parts of the video consist of a wedding party getting ready for the ceremony. The entire time we are convinced that it’s the young man and woman who are to be married, but at the very end of the video, we are stunned by a sweet surprise that we really didn’t see coming!

The extremely catchy chorus plays as the unexpected couple walks down the aisle after saying, “I do.”

“You find the spot and I’ll find the money
You be the pretty and I’ll be the funny
You plant the flowers, I’ll plant the kisses
Baby let’s get right down to business
I’ll hang the pictures, you hang the stars
You pick the paint, I’ll pick a guitar
Sing you a song out there with the crickets and the frogs
You name the babies and I’ll name the dogs.”

The rest of the song is a celebration of true love, no matter what age you may find it at.

“I’ll Name The Dogs” was written by the same people who wrote Shelton’s hit song “Honey Bee,” which has a similar lyrical style.

Watch the sweet video for “I’ll Name The Dogs” below.