Blake Starts Singing ‘Hillbilly Bone’ Alone At The Opry, Then Trace Walks In And The Crowd Goes Wild 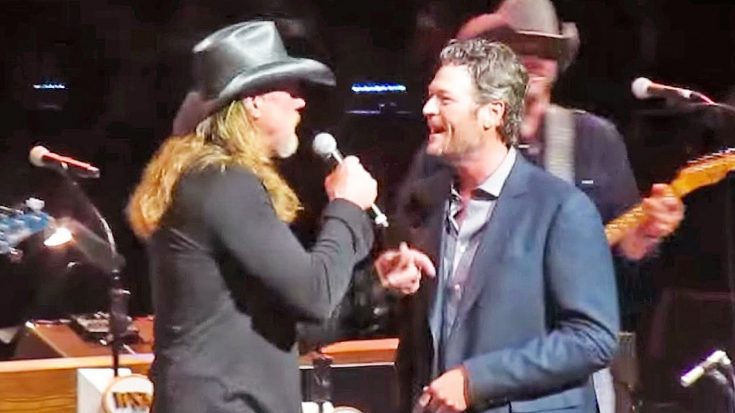 Trace Adkins and Blake Shelton go way back. Shelton admires Adkins as a mentor and source of inspiration, while Adkins is happy to provide Shelton with “fatherly advice.”

Not only was Adkins on hand when Shelton was inducted into The Grand Ole Opry in 2010, but he was the one who had the honor of inducting him. The Opry holds a special place in both artists’ hearts, and became the setting of an epic collaboration in 2015.

Adkins and Shelton took their friendship to the next level in 2009 when they recorded the song “Hillbilly Bone.” The song was a smash hit, and soared to claim the top spot on the Billboard country charts.

All these years later, and the crowd still goes wild whenever they hear “Hillbilly Bone.” Such was the case when Shelton performed the song at the Opry in 2015, but the audience had no idea what he had up his sleeve.

A video taken from the performance shows Shelton’s big surprise, which was waiting just out of sight of the audience. As Shelton moved into the chorus, the crowd was stunned when they heard a familiar, deep, bellowing voice.

That’s right! Shelton had Adkins show up to crash his Opry performance and surprise everyone in attendance. If you thought the crowd was crazy for “Hillbilly Bone” before, you should hear how they reacted when Adkins walked out on stage! And you can by watching the video below.

Shelton and Adkins haven’t collaborated on a new track in a while, but Adkins has kept busy. He recently released his new single, “Lit,” and it’s setting country music on fire!

A fun-lovin’, boot-stompin’ tune about all of the thrilling things in life, “Lit” is too good to resist. Go ahead and watch its lyric video below, then be sure to download the track off of iTunes here when you’re done!