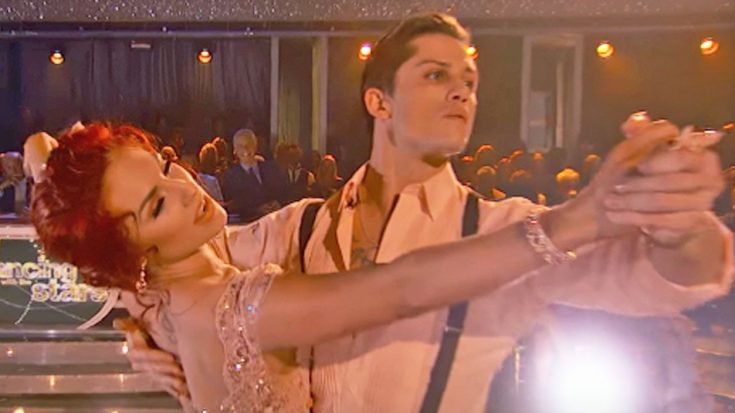 Professional Bull Rider Bonner Bolton came out of the gates swinging during the Dancing With The Stars Season 24 premiere last week. He danced a super sexy Cha Cha with partner Sharna Burgess, which prompted immediate dating rumors because of how insane their chemistry was.

This week, they slowed it down a little bit, but they definitely didn’t cool off. Dancing to Jennifer Nettles’ emotional song “Unlove You”, Bolton and Burgess performed a beautiful Viennese Waltz.

Their romantic dance earned them a score of 29/40 and praises from the judges. Co-host Erin Andrews definitely knows how hard it is going from a sexy, upbeat dance one week to a romantic and emotional dance the next, seeing as she previously competed on Season 10. She asked Bolton what served as his inspiration for the week.

He revealed that his inspiration was his uncle, who is now is a wheelchair following a horse accident last year.

“I know if he could, he’d be slow dancing with his wife, Vicki, right now,” Bolton said, clearly emotional. The camera cut to his grandma and other family members in the audience, who were in tears, cheering him on.

“My uncle suffered from a bad horse wreck last year and unfortunately, his walk-away wasn’t the same as mine and he wound up in a wheelchair,” Bolton said. “I was just visualizing him being able to dance with my aunt and slow dance, so that kind of connected me a little bit.”

After dedicating the beautiful Waltz to his uncle, there wasn’t a dry eye in the place.

Watch their dance below.