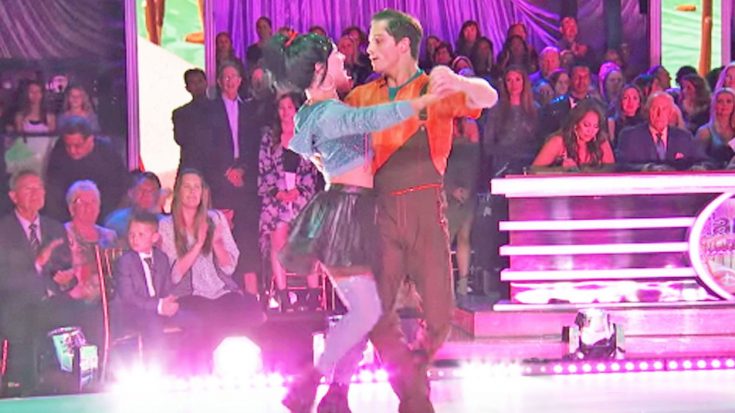 Last week, professional bull rider Bonner Bolton told the emotional story of how he was paralyzed from the neck down following a devastating bull riding accident a little over a year ago. Despite having a small chance of recovery, he is fully recovered other than having limited movement in his neck. He is lucky to be alive and now, he is dancing.

Bouncing back from such an emotional week is no easy feat, but having such a light hearted dance definitely helped. For Dancing With The Stars‘ infamous Disney Week, Bolton and his professional dance partner Sharna Burgess performed a tango to “When Can I See You Again?” from the film Wreck-It Ralph.

Bolton portrayed Ralph, the video game villain who desperately wants to be a hero for once and Burgess played Vanellope, a lovable character from a neighboring video game. Their tango was unique because Bolton is not able to snap his head quickly because of his injury.

Burgess had to be extremely creative with the choreography to include lots of tango content and they totally nailed it! Their dance was cute, creative and received well by the judges. It showed off the playful side of Bonner without looking forced like his Charleston a few weeks ago.

The judges loved how much of the dance was in hold and commended Bolton for his frame, asked him to be more dynamic, and loved that he embodied his character. He received a score of 30/40.

The best part of the dance was Bolton’s face throughout it – he couldn’t stop smiling! Even when he had to be tough, you could see the smile coming through.

What score would you give him? Watch his performance below.