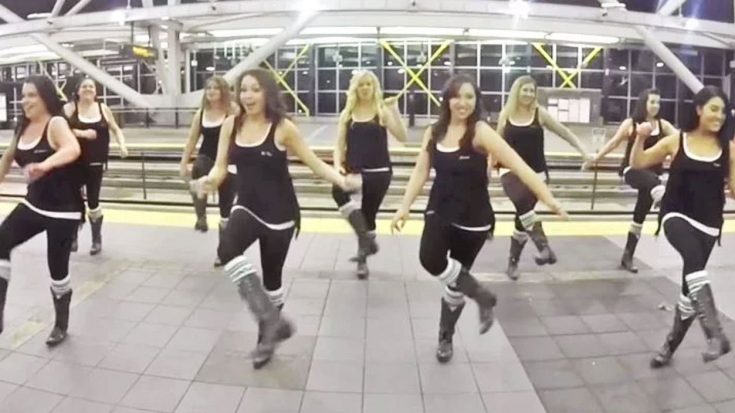 Out of all the line dance teams out there, the Boot Boogie Babes are one of the most famous. Hailing from Seattle, this talented group of gals proves that you don’t have to be from the country to know how to pull off a line dance!

Led by director and choreographer DeAnna Lee, the Boot Boogie Babes have danced to some of country music’s hottest hits. Just a few of the songs they’ve danced to include Maddie & Tae‘s “Girl in a Country Song,” Miranda Lambert and Carrie Underwood‘s “Somethin’ Bad,” and Sam Hunt’s “Body Like A Backroad.”

Back in November 2016, the girls decided to strap on their dancing boots and get down to one of the biggest hits on country radio at the time. That song was Luke Bryan’s “Move,” which was released in July 2016 as the fifth single off of his album Kill the Lights. “Move” made it all the way to the top of the U.S. Country Airplay chart and also secured the number one spot on the Canadian country chart.

The intense beat behind “Move” makes it the perfect song to dance to. This is something the Boot Boogie Babes recognized, which is why they crafted a line dance to match it.

Staying true to the title of the song, the Boot Boogie Babes went on the “move” for their dance. In the past, we’ve seen them dance in their studio or on stage, but they traveled outside of their normal boundaries for “Move.”

The video shows the girls dancing in two locations: a transit station and a local park. All of the girls dance their hearts out as everyday life goes on around them. We’re sure they stopped plenty of people in their tracks when they saw their routine!

This spunky dance is one you’ll want to learn as soon as you can. You’re in luck because there aren’t any super complicated moves in the routine. So what are you waiting for? Tune in to the video below and get grooving.

The Boot Boogie Babes never fail to amaze us. Way to go girls!