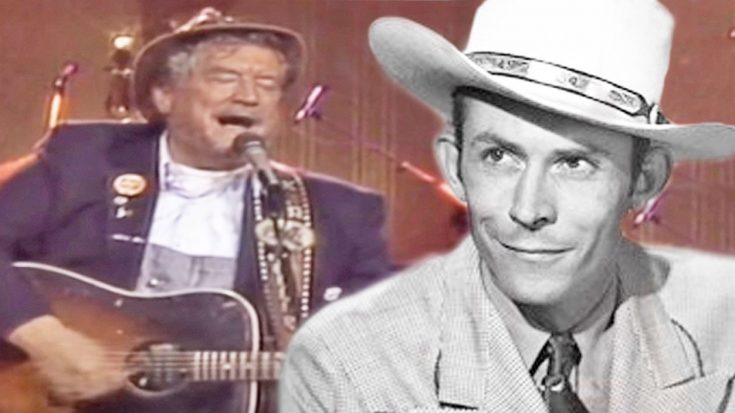 Before he was known to the world as Boxcar Willie, he was Lecil Martin, a flight engineer and personnel Sergeant in the Air Force.

One day, he was sitting at a railroad crossing when he saw a man pass by in a boxcar that resembled his chief boom operator, Willie Wilson. “There goes Willie,” he recalled saying. Moments later, he wrote the song “Boxcar Willie” and later adapted the name as his stage name.

He began performing country music full-time after leaving the Air Force in 1976 and was eventually inducted into the Grand Ole Opry as its 60th member in 1981. He proved his talent with original songs from his 16 albums, but also excelled at performing covers and paying homage to his peers.

At a performance at the Church Street Station in Orlando, Florida, Boxcar Willie payed tribute to the late Hank Williams with a medley of his songs.

He started it out with “Cold Cold Heart,”  and followed with “Half As Much,” “I Can’t Help It (If I’m Still In Love With You),” “Your Cheatin’ Heart,” “You Win Again,” Boxcar Willie’s personal favorite, “Wedding Bells,” “Lovesick Blues,” and one very special song that helped launch Williams’ legendary career.

“Well, we couldn’t sing Hank Williams song without singin’ the first one he ever put on record. Do y’all know the first song he ever put out was? It goes like this,” he said before singing the upbeat tune “Move It On Over”.

Each time he changed songs, the crowd went wild, loving each song more than the last. Watch the awesome medley below.