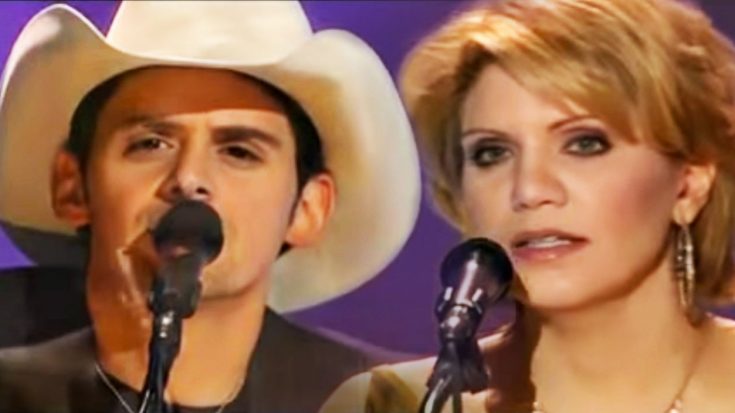 Audience members were left visibly shaken and teary-eyed after witnessing one of the best live performances of this heartbreaking hit on the magical Opry stage.

This chart-topping and award-winning song has been a cherished classic throughout the world since country superstars Brad Paisley and Alison Krauss released it as a duet on his 2004 album, Mud on the Tires.

15 years ago Brad Paisley's "Mud On The Tires" pulled into the #1 spot on the Billboard country albums chart. #MusicIsLife pic.twitter.com/CKzhhPj0bf

Taking to the Grand Ole Opry stage for this one-of-a-kind performance, Krauss and Paisley break hearts as they sing this chilling ode known as “Whiskey Lullaby”.

Penned by country great Bill Anderson and country singer/songwriter, Jon Randall, this unforgettable song is a dazzling ballad that exposes the pain and devastation caused by a breakup – and tells the story of a man falling victim to alcoholism and drinking himself to death over a broken heart, later succeeded by his former lover drinking herself to death from living with the guilt of his passing.

The pair move effortlessly through this heart-wrenching song as they pour their souls out into each note and fully grasp the emotion of the song. Their genuine delivery and gold star talent resonates throughout each line they sing.

Watch Alison Krauss and Brad Paisley’s deeply chilling and emotional performance of “Whiskey Lullaby” in the video below.