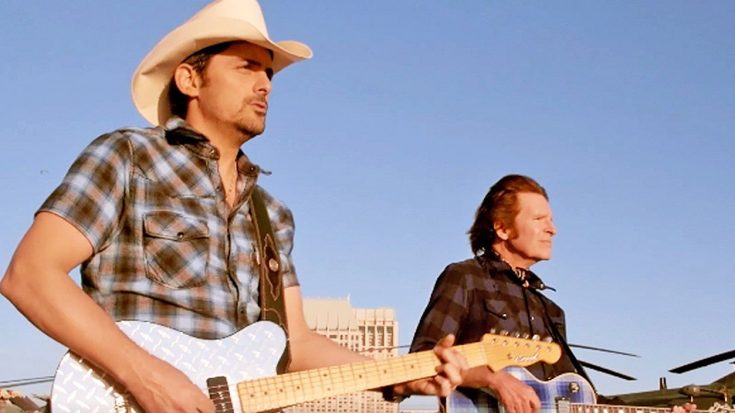 “One of the more important things I’ve ever said and I’m so honored to say it with John Fogerty,” the country singer said in the caption of his music video.

The video, shot in San Diego, California, incorporated a variety of military icons and emotional testimonies, kicking off their fiery performance with one goal in mind: respect our heroes.

The song’s chorus deeply struck listeners as it explosively admitted, “And they say all is fair in Love and War/ But that ain’t true, it’s wrong/ They ship you out to die for us/ Forget about you when you’re done.”

The powerful blend of the men’s voices incorporated two unique sounds that produced a spine-chilling harmony, resonating deeply with fans.

See Brad Paisley and John Fogerty call out the mistreatment of war veterans in their "Love and War" video https://t.co/CZTjqsRIQ4 pic.twitter.com/QDunPJnKw4

“They call ’em decorated heroes/ And pin some medals on their chest/ Give ’em a tiny little pension/ Could we do much less,” they sang, eager to make a change to help those who have been forgotten after serving to defend our nation. Their impactful duet had fans buzzing about their profound message and their stunning music talent.

“Love and War” was released off of Paisley’s newest album of the same name and has become a hit with country music fans and military supporters alike.

Check out Brad Paisley & John Fogerty’s hit duet in the video below and let us know if you agree with the song in the comments.