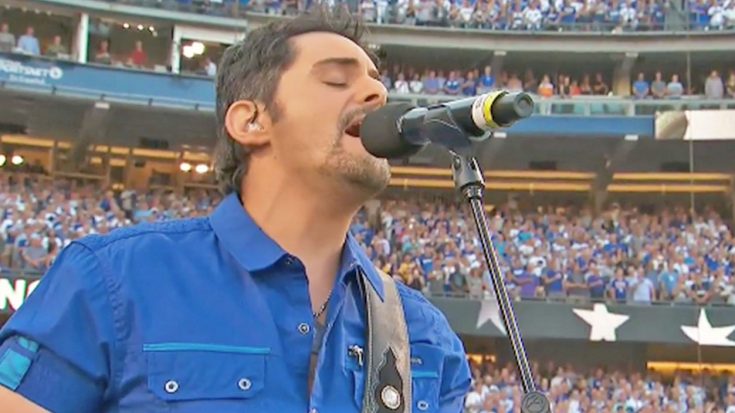 Accompanying himself on the electric guitar, country superstar Brad Paisley was given the honor of performing the National Anthem just minutes before one of the most important baseball games of the year.

The Los Angeles Dodgers and the Houston Astros stood in front of their respective dugouts with their hands over their hearts as Paisley belted out “The Star-Spangled Banner” in front of over 50,000 fans at Dodger Stadium.

Paisley took over the Dodgers’ Twitter account earlier today to announce that he would be singing the National Anthem and added, “Go Dodgers!” at the end of the video.

.@BradPaisley will be performing the national anthem prior to tonight’s game! #WorldSeries pic.twitter.com/nhKnKH196l

This is a historic series for both ball clubs. The Dodgers haven’t been in the World Series in 29 years and this is only the second time in franchise history the Astros have been in this position.

Donning a shirt that can only be described as “Dodger blue,” Paisley put on a terrific performance of our nation’s anthem and represented country music extremely well!