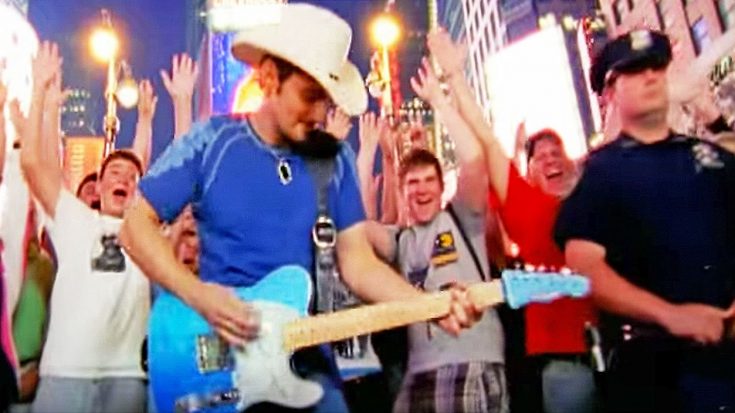 Country music superstar Brad Paisley is helping us ring in the new year with a little blast from the past that reminds us of the simpler days before technology was extremely accessible thanks to his music video for his hit song “Welcome To The Future.”

Check out the music video for Brad's single "Welcome to the Future" NOW at www.bradpaisley.com!

He jumped straight into the nostalgic hit by remembering his childhood love for television and the arcade game Pac-Man. He sang of the fun game and the lengths he had to go through to play it, explaining, “I used to have to get a ride down to the arcade; Now I’ve got it on my phone.”

Paisley, while addressing the progress and massive societal leaps we’ve made in aspects of culture and technology, referenced a variety of significant events and memories that have been remedied or essentially made much easier throughout the years.

Liked on Spotify: "Welcome to the Future" by Brad Paisley https://t.co/jPHOisuzSq pic.twitter.com/PZodHDbH2S

He continued to sing about cultural divide, recalling his grandfather fighting in WWII, in addition to thinking back to an event in which a black student who he attended high school with built up the courage to ask out the white homecoming queen.

Paisley sadly admited that, upon the act, a group of people burned a cross in the young man’s front yard for what they believed was a warning on his behavior that they refused to allow and accept because of the color of his skin. The country star sang, “I thought about him today, everybody who’s seen what he’s seen, from a woman on a bus to a man with a dream. Hey, wake up Martin Luther. Welcome to the future.”

Brad earns his 11th consecutive #1 single with “Welcome to the Future!" W2TF also becomes the second #1 hit from his…

This heartwarming song not only addresses the advances made in the past that have positively impacted the present, but the new opportunities and motivation we need to shape an even better future.

Listen to the incredible song below.