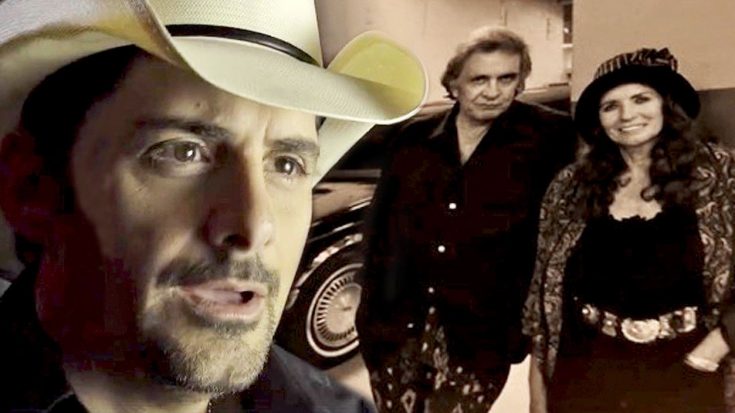 When Brad Paisley revealed the writer credits for his upcoming album Love and War, fans were quick to note the presence of a country legend among them. That legend was none other than Johnny Cash, who shares a credit with Brad on the track “Gold All Over the Ground.”

Forever Words, a posthumous collection of Johnny’s poems, was released in 2016. It was the first time that “Gold All Over the Ground” was ever published. Johnny wrote the poem as a declaration of love to his wife, June Carter Cash. Sadly, Johnny died before he was able to turn the poem into a song.

Brad was the one who picked up where Johnny left off. Johnny and June’s son John Carter Cash introduced Brad to the poem, and he started singing it right away. John Carter was mesmerized:

“It felt just as if my father was alive as he ever was. Brad connected deeply. Sometimes when music is that powerful, it has a life of its own, and it’s going to be heard.  It was magical.”

Brad brought that same magic to his newly-released music video for the song, which debuted on Tuesday (April 25). He recorded the video at the famous Cash Cabin recording studio, the same place where Johnny recorded songs later in his career.

The cabin is filled with mementos and photos showcasing Johnny and June’s relationship and careers. Brad strolls throughout the cabin, drawing attention to each one of these sentimental objects.

Footage of Johnny and June is laced throughout the video, showing the couple during some of their happiest times. The whole thing is bookended by Johnny’s dialogue, as he proclaims his everlasting love and appreciation for June.

Overall, Brad’s video serves as a respectful tribute to Johnny and June’s inspiring love story. Filled with emotion, the video will have you smiling one second and crying the next.

You can enjoy the video for “Gold Over the Ground” below. Hats off to Brad for doing such a beautiful job with this.