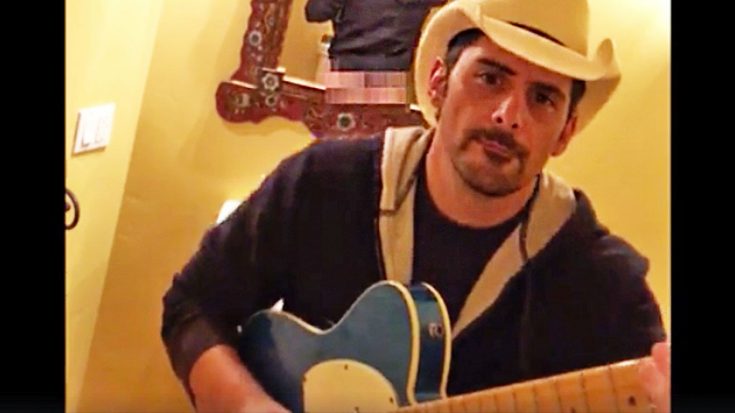 Brad Paisley has a bold message for self-indulging individuals, sharply reminding them that “the internet is forever”! With a little help from his fans, the country star compiled a variety of embarrassing footage or photographs in which a selfie went entirely wrong, using the clips to structure a downright hilarious montage!

Using Facebook, Paisley greeted his fans and explained, “This is the video for selfie, #TheInternetIsForever.” After a bit of technological confusion,  the video kicked off with clips of fans attempting to take a group photo, although quickly transitioning to Paisley during a live performance in which he used his “selfie skills”  to record him singing with his audience. As the video continued, countless selfies flooded the screen, showcasing embarrassing or shaming footage caught on camera.

“Your grandmother’s in an open casket/ You’re in a suit and shades/ You take your iPhone out and snap it, #sadday/ You oughta be ashamed,” the country star sang. The diverse lyrics were aimed directly at those whose pictures were featured, as Paisley states, “You oughta be ashamed of your selfie.”

However, the country singer entered a bit of his own footage, leaving fans in a fit of laughter as they witness the star partaking in a variety of embarrassing situations! You can experience the laughter by watching his hysterical new music video below!

The song will be featured on his upcoming album Love and War, expected for release on April 21.