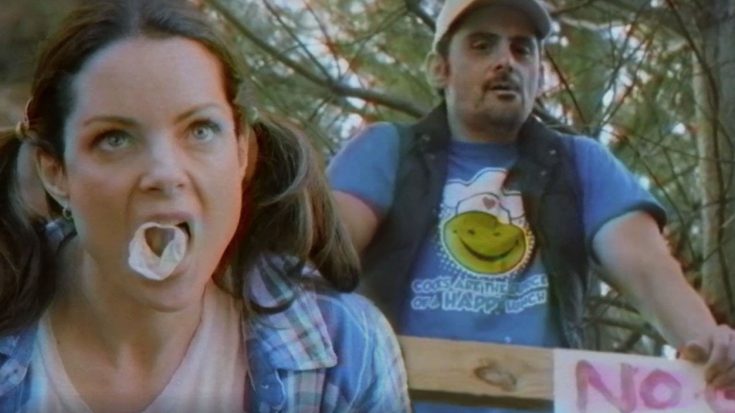 Kimberly Williams-Paisley is clearly a comedian to be reckoned with, making a hysterical appearance in husband Brad Paisley‘s music video that had fans of both the actress and country star rolling with laughter.

Brad & I want to thank you all for your support of our nonprofit, The Store. We have exciting news. An anonymous donor has committed to match up to $500,000 in donations that are made by March 1, 2019! If you want to double your gift, go to thestore.org to donate today. THANK YOU!! ???#thursdaymotivation @thestore_nashville

A post shared by Kimberly Williams-Paisley (@kimberlywilliamspaisley) on Dec 20, 2018 at 6:58am PST

As Paisley released his music video for his song “Last Time For Everything,” it was his guest star and partner in crime that helped the country singer properly convey his unique approach. Replicating the Netflix show Stranger Things Paisley’s song embodies the range of memories that unknowingly become our last.

There's a fine line between adventure and nightmare. #StrangerThings

As the music video depicts a variety of outrageous ideas, such as aliens invading the world to dinosaurs roaming free in the field, his nostalgic scene with his wife Kimberly tugged at the heartstrings of doting viewers. The scene showed Paisley and a gang of boys hiding out in their tree house boldly displaying “No girls allowed”! Kimberly and her biker girl gang are seen taunting the boys from down below, as she sassily pops her gum and glares at the country boy!

As the song continues and transitions to various scenes and plots, the camera pans back to Kimberly and her rebellious friends as Paisley sings the heartwarming lyrics, “Kissing goodbye on her porch and driving away/ Introducing her as your fiancee/ Getting woke up at 5 am to see if Santa came/ There’s a last time for everything.”

This is a music video you don’t want to overlook! You can check out Paisley’s creative concept below and tell us what you thought!