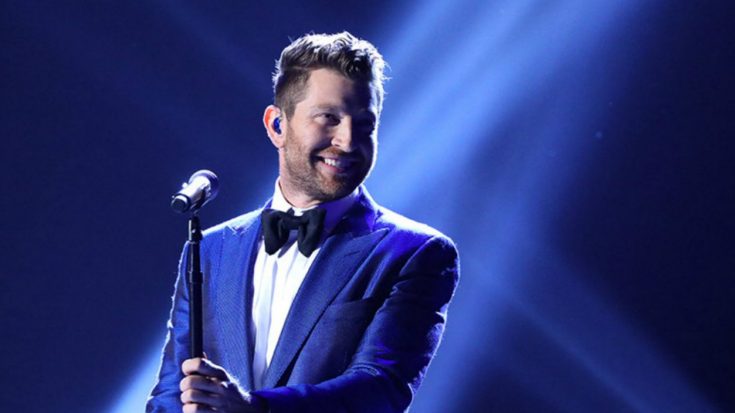 Brett Eldredge fulfilled one of his lifelong dreams this year when he recorded his first Christmas album. ﻿The project entitled Glow was released in late October and is a tribute of sorts to the music Eldredge grew up listening to.

“I dreamt of the day I could record all these classic songs that I’ve loved since I was a little kid,” Eldredge said in a press release. “I recorded those classics in New York City and tried to give a tip of the hat to the ones that came before me – Bing Crosby, Frank Sinatra, Dean Martin, Ray Charles – by adding that swing and that soul to the best of my ability.”

For the past two Christmas seasons, Eldredge has treated an invitation-only audience in Nashville to a concert that includes covers of some of his favorite classic holiday tunes by artists such as Ray Charles, Frank Sinatra, and more. His dream is to make the event into an annual charity benefit concert. But, Monday night the singer gave us a glimpse of those private concerts and his new Christmas album with his performance during the CMA Country Christmas special.

30-year old Eldredge captivated the audience with his beautiful rendition of “Have Yourself A Merry Little Christmas,” a tune that was first recorded by Judy Garland for the MGM movie classic Meet Me In St. Louis in 1944 but was made popular by Frank Sinatra more than a decade later.

Eldredge’s entire Christmas album is jam-packed with holiday classics that are sure to get you in the spirit of the season. The album song list includes “Let It Snow!”, “I’ll Be Home For Christmas,” “White Christmas,” and “Baby, It’s Cold Outside” featuring Meghan Trainor. Get a copy of Brett Eldredge’s Glow by clicking here.

Watch Brett Eldredge’s performance of “Have Yourself A Merry Little Christmas” from CMA’s Country Christmas below.