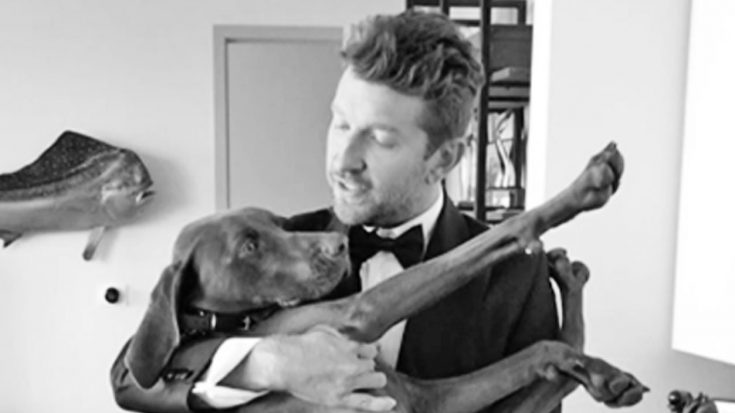 Over the last few years, the world has fallen more and more in love with country singer Brett Eldredge. His silky smooth voice is enough to make you feel weak at the knees, but there’s one thing he did that has had the Internet in a full-on obsession with him. He became a dog dad.

Eldredge welcomed a pup named Edgar, and his fans love when he posts photos and videos of them together. Edgar usually goes on the road with his dad, even making some appearances on stage, with the correct ear protection of course!

Trying to train EDGAR on how to be a STAR! Whataya think!? @watershedfest #sheddersforlife (full video on my facebook)

Besides taking adorable photos of Edgar, Eldredge is starting to become known for serenading his dog to sleep. He’s previously sung “Make You Feel My Love” and “You Are My Sunshine” to his best buddy, but his latest tribute is by far the best and most heartwarming of them all.

Singing Frank Sinatra’s “The Way You Look Tonight,” Eldredge put on his best tux to sing the jazzy tune while holding Edgar.

“Edgar and I getting ready for a big date…just kidding, we will probably just lay on the couch in our tuxes,” the country crooner captioned the video.

Comments began flooding in from fans who were loving the serenade. Check it out for yourself below!