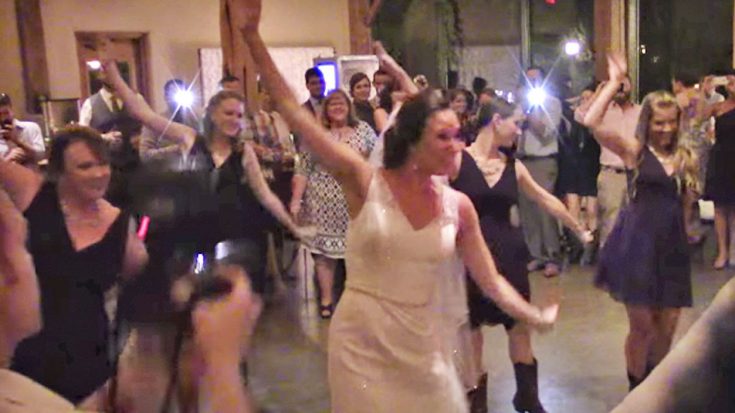 Just moments after Kelly and Victoria Daacon became husband and wife, Victoria gave him the surprise of a lifetime at the reception of their 2015 wedding.

While guests were mingling, the DJ made an announcement that there was a special song about to be played. Moments later, “She’s Country” by Jason Aldean began playing and Victoria was standing center stage.

She began doing a choreographed line dance for her new husband, which he looked impressed by, but what happened next is what really blew him away. Three of her bridesmaids joined her and after one verse, Victoria motioned for more people to join them on the dance floor.

Turns out, every woman invited to the wedding was sent a secret YouTube video to learn all the dance moves so they could shock all them men in attendance, especially Victoria’s new husband, Kelly!

The women, aged 21-60, all looked like they were having an incredible time and they really blew us away with their ability to learn this advanced of a dance just by watching the YouTube videos!

What a great surprise and an incredible memory to have for years to come! Watch the awesome line dance flash mob below.