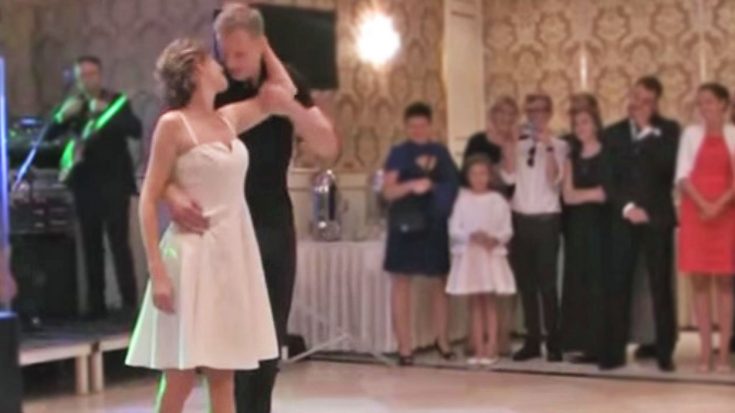 Anyone who has been to a wedding would know, the bride and groom’s first dance as husband and wife is the highlight of the reception. Oftentimes the happy couple will play a romantic slow song to dance to together.

Looking lovingly into one another’s eyes, they find themselves completely lost in the moment as their guests watch in awe.

If the bride and groom are truly skilled in the art of dance, they can choreograph an entire piece that will leave all of their guests speechless. These dances get even better when they take on a certain theme, like one dance performed by a bride and groom in 2015.

Bride & Groom Have Time Of Their Lives

When Asia and Maciek got married on August 22, 2015, they wanted to surprise their guests with a one-of-a-kind dance at their wedding reception. The theme of the dance was based on the famous scene at the end of Dirty Dancing, set to the film’s popular song, “Time of My Life.”

Dressed just like the characters from the movie, Asia and Maciek reenacted all of the memorable moves from the final dance in Dirty Dancing. Their guests were clearly blown away by what they were witnessing, and kept hooting and hollering for the couple as they danced.

With the crowd clapping along to the beat, Asia and Maciek shimmied and spun all around the dance floor. At one point in time, a few guests came out of the crowd and joined them in their dance!

Wait For The Lift…

Of course, Asia and Maciek couldn’t do a Dirty Dancing performance without including the famous lift. You know which one we’re talking about…

The first attempt at the lift was a little shaky, but Asia and Maciek didn’t let that stop them. They gave it one final shot, and they managed to nail it to a tee!

It’s obvious that Asia and Maciek are huge Dirty Dancing fans, because they went all-out to ensure their dance looked just like the movie. We have to admire that level of commitment, because it resulted in an unforgettable dance for them and their guests.

These two aren’t the only ones to ever attempt the “Time of My Life” dance at their wedding. Head below to watch another first dance video that mimics the same routine!