Bubba J Gets Hysterical Cultural Awakening During Trip Around The World 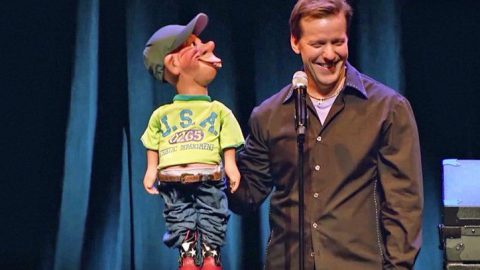 Jeff Dunham‘s favorite redneck puppet was administering some serious laughs on his multi-cultural tour during Dunham’s 2014 special All Around The Map.

Bubba J, a NASCAR enthusiast and beer aficionado, was confronted with a variety of culture shocks throughout his trip, partaking in hilarious dialogue with not only his puppet master but the live audience as well!

Bubba J praised his first stop, Ireland, and called it the “land of beer.” He hilariously told Dunham, “I know we’re going to Israel soon, but, well, we’ve been here in Dublin [and] I’ve seen pubs everywhere. So, I’m pretty sure THIS is the Holy Land,” sending the audience in laughs and cheers of agreement.

However, as the puppet headed to Abu Dhabi to meet his fans and give them a show they’re sure to never forget, the redneck got a bit tongue tied pronouncing the foreign name. Amidst giggles and confusion, Bubba J asked, “I thought that’s what Fred Flintstone says when he’s excited,” referring to the catchphrase, “Yabba Dabba Doo!”

After learning that South Africa has the largest brewery in the world, Bubba J was suddenly interested in that country. He confessed that he intended to write a letter to his wife explaining that the brewery is, without a doubt, keeping him in South Africa forever. His following joke had the audience in side-splitting laughter.

“So, after you become a citizen of the South Africa, how long does it take for your skin to turn black?” the puppet whispers. Bubba J begins to scan thorough his front row audience, essentially all fairly light-skinned, as he announced, “These guys are pretty early on, too, I think.”

For his final stop, Bubba J visited Singapore, and told the audience that they had earned the title of “his favorite European city,” sending them into a roar of laughter.

Despite his lack of dialect, the puppet began to interact with the audience and attempted to pronounce the name of a man sitting just before the stage. However, Bubba J had quite the struggle in his hilarious endeavor, admitting to Dunham that his tongue was rendered broken after his failed attempts with various pronunciations.

Although attempting to become familiar with the common religion of Singapore, Buddhism, Bubba J wrangled with the concept of reincarnation. Once again, he had a little trouble pronouncing the word and ended up calling it “reincarceration,” and adding, “you get out and then, suddenly, you’re right back in!”

Needless to say, Bubba J was a hit with his diverse audience. You can watch the hysterical video below!