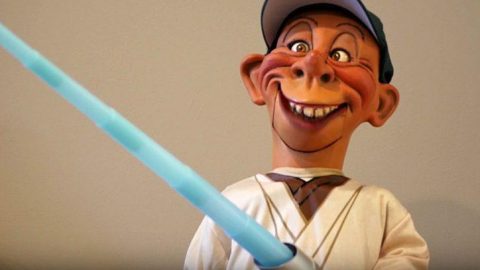 Comedian and ventriloquist Jeff Dunham has had huge success with his diverse and undeniably hysterical puppets featured in his routines and videos. While his puppets have gone on several group and solo adventures, one dim-witted member has continued to stand out above the rest, at least to us, with his hilarious redneck nature and downright lack of common sense.

Bubba J, Dunham’s lovable redneck puppet, has elicited the biggest of laughs with his various videos, ranging from holiday mishaps to interviews on current events and trending topics.

Bubba J is a beer-drinking, animal-hunting, truck-driving upbringing and was forced to step out of his comfort zone when he was asked to audition for the iconic movie franchise Star Wars.

In the audition, he was draped in a beige cloak wielding a blue light saber and refused to stray from his roots as he added his classic baseball hat to his clothing ensemble.

“I am a jeti kanigatit…,” the puppet hesitantly sounded out. “Uh, that’s ‘Jedi Knight’,” a distant voice said, correcting the puppet. Bubba J giggled at the correction as he admited, “No, I’m not!”

The series of auditions included all of Bubba J’s fellow puppet friends, giving absolutely hilarious impersonations of various Star Wars characters and their iconic lines with a twist of their own personality.

Of course, no Bubba J feature could be complete without a reference to the redneck’s love of guns. As he extended his lightsaber, Bubba J began to make his own sound effects and then said, “This is fun, but, ya know, a shot gun works better!”

We’re sure you’ll be in tears of laughter after this hilarious montage! Be sure to enjoy these puppets’ comedy skit and let us know what you thought in the comments!