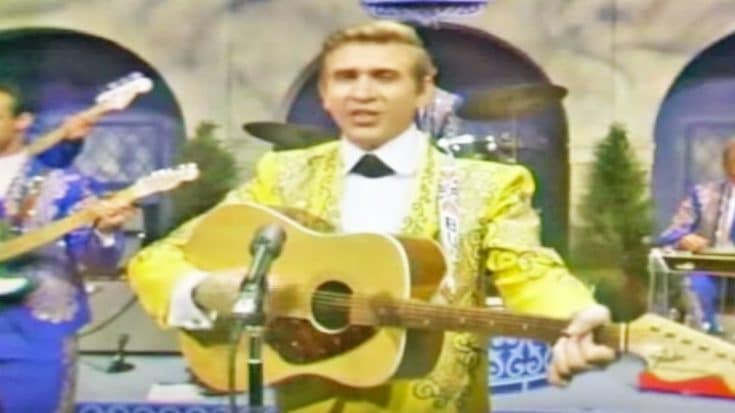 Donning the iconic yellow jacket, Buck Owens and The Buckaroos performed their famed country classic, “I’ve Got a Tiger By the Tail,” at the Ranch Show in March of 1966.

The country tune was released in 1964 by the crew and is widely considered one of their signature songs. The song was extremely well received, reaching No.1 on Billboard’s Hot Country Singles as well as No.25 on the all-genre chart.

Owens came up for the concept of the song while at an Esso gas station with the company’s slogan  at that time, “Put a tiger in your tank.” “I’ve Got a Tiger By the Tail” embodies the infectious Bakersfield sound associated with his music while telling the story of a man in love with a wild woman leading a fast-paced life and he’s just along for the ride.

At age 76, Owens passed away in his sleep in March of 2006 but his legacy lives on through his music often still performed by The Buckaroos. The legend was a class act gentlemen all the way up to the night of his death.

Buck Owens and The Buckaroos

In an interview with the Los Angeles Times, Jim Shaw – longtime spokesman for Owens as well as Buckaroos keyboard player – shared that Owens wasn’t feeling well the night of his final performance. Almost missing the show altogether, Owens stormed the stage just as The Buckaroos were announcing he wasn’t going to make it.

“If somebody’s come all that way, I’m gonna do the show and give it my best shot. I might groan and squeak, but I’ll see what I can do.” Shaw recalls Owens saying. “So, he had his favorite meal, played a show and died in his sleep. We thought, that’s not too bad.“

You can watch the 1966 performance of the iconic song below.