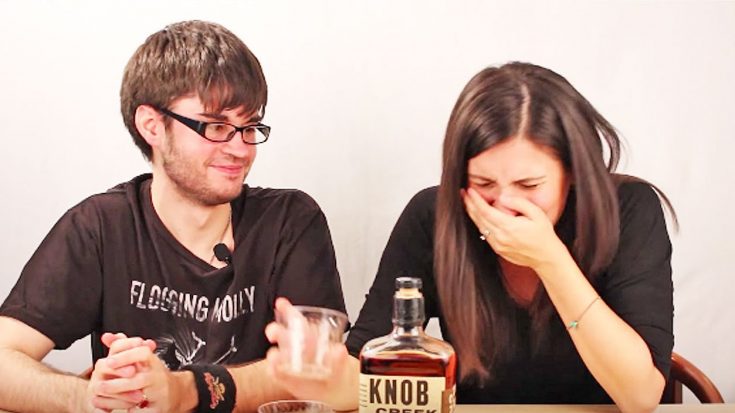 Six brave Californians were invited to test out a series of Kentucky-bred bourbon, and definitely didn’t know what they were in for! The west-coasters cozied up with five different brands of whiskey and bourbon, making for a hilarious end result.

First up on the taste test was Four Roses native to Cox Creek, Kentucky. The brand was met with an overall pleasing consensus, one of the contestants even giving it an enthusiastic “Four thumbs up.”

Next up on the chopping block was Maker’s Mark straight out of Loretto, Kentucky. The drink received mixed reviews, with one taste-tester claiming he thought it “went down more smoothly,” while another joked she thought it “went [back] up” easier.

The third whiskey up for evaluation was Eagle Rare, born and raised in the city of Frankfort. The whiskey was met with a group consensus that it was “fire in [your] mouth.”

Knob Creek whiskey native to Clermont, Kentucky was the fourth brand up. Like Maker’s Mark, the whiskey was met with mixed results, besides the fact the brand’s alcohol content was overwhelming, coming in at a whopping 50 percent.

Last, but definitely not least was Buffalo Trace of Frankfort, Kentucky. With four whiskeys already down the hatch, the Californians hysterically struggled to put their opinions into words.

You can watch the hilarious video below and be sure to let us know what you think in the comments!