By Miranda Raye on January 23, 2018
Advertisement 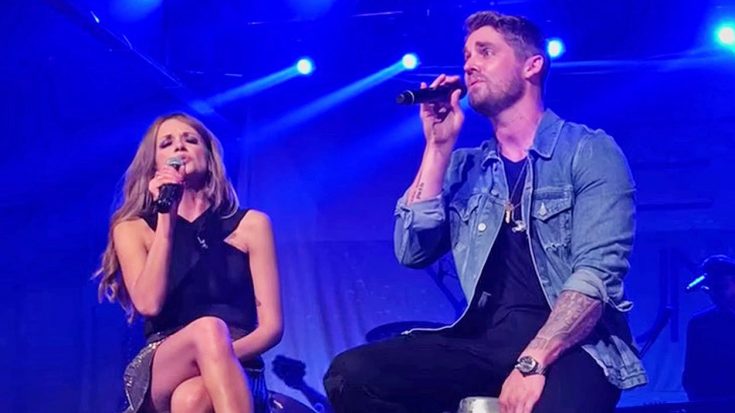 If you asked any modern country fan to name some of the brightest stars in the genre, two names would immediately come up: Carly Pearce and Brett Young.

For those of you who don’t know, Pearce is the immensely talented vocalist and co-writer behind the chart-topping country hits “Every Little Thing, and “I Hope You’re Happy Now.”

Young is also no stranger to number one hits. He has six so far: “In Case You Didn’t Know,” “Like I Loved You,” “Mercy,” “Here Tonight,” and “Catch,” and “Lady.” His debut single, “Sleep Without You,” was also a chart success, and climbed as high as the second spot on the U.S. Country Airplay chart.

In other words, both Pearce and Young have managed to capture the attention and the hearts of country fans. So imagine how excited one Nashville crowd was when they got the chance to watch them sing together in 2018.

Before they started singing, Pearce and Young revealed that they had known each other for years. The two performed together when they were both in the early stages of their careers, and often had to travel to some interesting venues. Speaking to the crowd, they recalled playing shows in living rooms with no microphones, amps, or any other equipment.

But those tough times helped strengthen them as artists, and as friends. So when they found out they were going to be playing the same show, they knew they wanted to sing a duet.

They threw out a few songs they could sing, when finally Brad Paisley and Alison Krauss‘ heart-shattering duet “Whiskey Lullaby” was suggested. Pearce knew right away that was the song she wanted to sing with Young.

As they led in to the song, Young warned everybody to get their tissues ready for Pearce’s verse. He wasn’t kidding, because when we listened to Pearce sing that verse the waterworks started right away. Though to be perfectly honest, we were already crying prior to that point.

You’re sure to be brushing away a few tears of your own as you watch Pearce and Young sing “Whiskey Lullaby” in the clip below. Once again, they have proven why they are two of the top artists in country music right now!