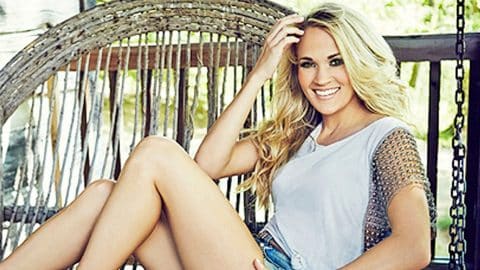 Country superstar Carrie Underwood proved, yet again, that she’s just like the rest of us!

In her most recent Instagram post, she shared a photo of herself without makeup after a workout, while calling herself a “sweaty mess”.

Even though she is a “sweaty mess”, she still looks great! The comments section of her Instagram was blowing up with people saying, “Wow, Carrie is beautiful with and without makeup!”

In the caption she asked her fans to be nice, and that they were. Almost 3,000 comments flooded her post, which is more than any of her posts have received in the last two months.

She was also sporting “an adorable tank”, which is from her activewear line Calia by Carrie Underwood. Carrie has proved time and time again that she is an incredible role model for young women and this is another reason why!

Isn’t she just beautiful?! Watch her perform her latest single “Dirty Laundry” below.