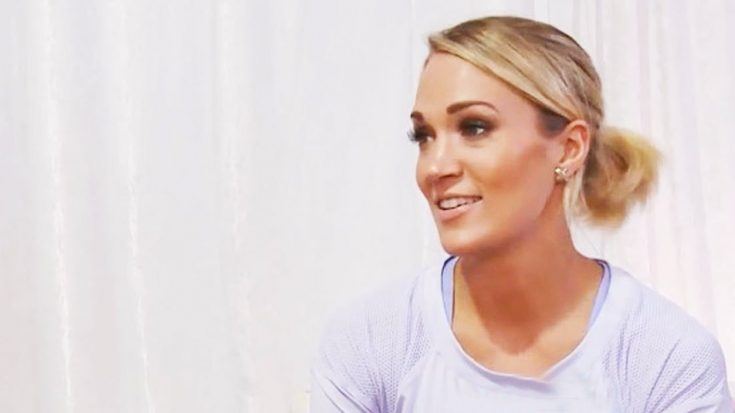 In the midst of her busy schedule, Carrie Underwood found 42 seconds to chat with E! News and reveal some fun facts we never knew about her. At some point between tour stops and prepping for her co-hosting duties for the CMAs, Underwood sat down with E! to play “Q in 42.”

Underwood managed to answer an impressive 14 questions during the 42 seconds. We learned so much about her in that short amount of time, such as the fact that she wakes up before her hockey player husband, Mike Fisher.

Even then, Underwood revealed that she slept until 9 AM the morning of her interview with E! She also said that she’s not really a night owl or an early bird, and that coffee is her caffeinated beverage of choice.

Besides talking about her sleeping habits, Underwood also came clean about her guilty television pleasure. We were fully expecting her to say The Walking Dead, since she’s been open about her love for the series many times in the past.

But Underwood took us by surprise when she admitted that her guilty television pleasure is actually The Bachelor and Bachelorette series! We didn’t see that coming, and neither did E!‘s Carissa Culiner, who was interviewing Underwood.

We’re sure Underwood isn’t alone, considering the success of the Bachelor and Bachelorette. Tune in below to watch the full video of Underwood answering 14 questions in 42 seconds to learn even more fun facts about her!