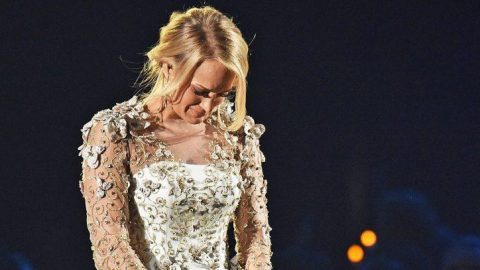 For the tenth time, Carrie Underwood and Brad Paisley served as the hosts of the CMA Awards in 2017.

Leading up to the ceremony, Underwood was also announced as one of the scheduled performers. No one knew what to expect from her or her performance, since she had been off the touring scene that year.

Underwood’s voice rang throughout Bridgestone Arena as she sang the opening lines of the beloved hymn, “Softly and Tenderly.”

Not sure there will ever be a more powerful performance on the #CMAs. Just felt Jesus in our living room. Amazing job @carrieunderwood

During the performance, images of artists, musicians, and musical figures that passed away that year flashed on a screen behind Underwood.

In the middle of the performance, a few clips played of some of the artists the country music community lost in 2017. These clips came from former CMA Awards ceremonies, and featured Don Williams, Glen Campbell, and Troy Gentry.

Beautiful way to remember all those we lost this year. #CMAawards pic.twitter.com/gFbQCBqK3i

At the end of the performance, Underwood found herself struggling to sing as images of the 60 people who were killed during the mass shooting at the Route 91 Harvest Festival in Las Vegas appeared on the screen. The shooting occurred on October 1, 2017, just a month before that year’s CMA Awards.

Rest in peace to the beautiful people we lost in Las Vegas…#CMAawards pic.twitter.com/pXahzNM8Q7

Underwood was in tears by the time she finished the song. Watch the performance below.

This was such a touching tribute to the 60 people who lost their lives on that tragic October day.